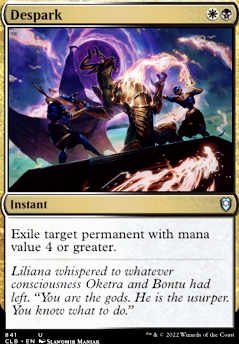 Feeding the Drawing Addiction
by isaelis

Life of the Party
by brolio

Despark is hardly what I'd consider a cut-throat card. Sometimes the restrictions on some spells can be helpful. It cut's back on the decision-making overload sometimes. I'm with TypicalTimmy; Despark is decent removal.

TypicalTimmy, not every deck needs to be competitive to a cut-throat degree; some people actually play the game for the enjoyment of doing so, not because they wish to dominate other players and be the best player.

Also, I do have a copy of Despark in my Liesa, Shroud of Dusk deck, because that card fits the theme of that deck.

You're not, generally, going to have both unconditional as well as low MV. If you do find something like that, it'll be a +$30 card because everybody will want one.

Sometimes you'll simply need to bite the bullet and accept a 2-mv spell that doesn't target 100% of the time, or a 3-4mv spell that generally hits anything but is harder on curve or multiple spells per turn. For example, Murder is a good alternative to Go for the Throat if you want less restrictive targets. However objectively ask yourself, do you REALLY see Artifact Creatures with such frequency that GftT becomes worthless? I am willing to bet the answer is no. And if you think the answer is yes, randomly select 100 decks on this very website and let me know how many artifact creatures exist within them, in total. I'm guessing it's a handful.

And as for Despark, sure it hits only MV 4 or higher, but you know what, most of the problem cards fit into that. Sure Thassa's Oracle and Dockside Extortionist do not, but then you must ask yourself this: "Am I playing exclusively within a cEDH meta?"

If your answer is no, than the chances of you CONSTANTLY playing against cards such as these is significantly lower, and thus Despark becomes more and more viable. If nothing else, it rids the board of most Commanders. Since many decks require their Commander to function at optimized levels of play, you essentially shut down their engine instantly (pun intended).

There is a saying: "Beggers can't be choosers."

So if you are not constantly playing cEDH levels of competitive play, a low costed, albeit restrictive, removal spell is fine.

Especially with your numerous threads as of late about tutors. If you require that many tutors, then simply tutor the removal spell that is sufficient for that particular situation.

Thinking of going back to using Despark instead of Assassin's Trophy. The casting cost on the trophy is appealing, and it is nice that it isn't limited by mana costs, so can be my go to removal spell. Spark may be limited by mana costs, but doesn't give my opponent a land when I use it. Not sure how I feel about my main removal spell giving my opponent a land, but also not sure how I feel about my main removal spells being limited by mana cost, or wasting an uncounterable Abrupt Decay on something because Despark couldn't target it, even though I might need the uncounterable part later on. But, it's still starting to seem better than giving them an extra land as soon as turn 3 with Assassin's Trophy. Quite the conundrum!