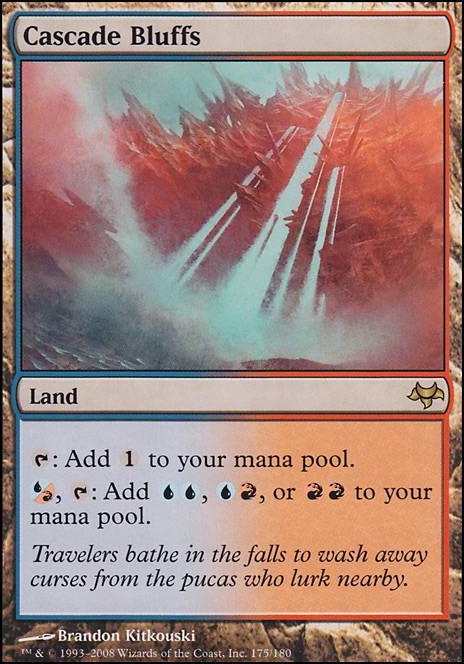 Cascade Bluffs occurrence in decks from the last year

Intet, the Dreamer
by Envynot

Nice deck! I would consider gving your land section an upgrade. Maybe consider cutting some of the tapped ones for some of these!

This is a great deck! But hold on buddy, that is a LOT is basics. I would cut some of those for some of these:

Givin the Dog a Bone: Pako and Haldan EDH

I would upgrade the lands a bit in your deck, to make it win a lot faster and be more efficient! You have all the shock lands (Breeding Pool, Steam Vents, and Stomping Ground! You also have all the check lands (Hinterland Harbor, Sulfur Falls, and Rootbound Crag However, I would try and include some of the following:

Hey, consider Primal Surge? I suggest it because there's very few instant/sorceries here and Surge can dump a ton of your deck onto the battlefield in one turn. Surge can put lands onto the battlefield. You can get ramp from more permanent sources: mana dorks, mana rocks and land auras. Rift and Chord are worth playing even with Surge.

Probably Remand. The card is good, but the format is just so fast now, especially with red blizt at the top. Maybe also some of the cantrips, as you probably don't need more than 4 or 5 with 24 lands. Cascade Bluffs is also another card to consider to help cast kiki-jiki.

Yarok, interesting. There seems to be a big push for the inclusion of Sliver Hive - what do you think about my recently voiced thoughts in the comments above? My consensus is that it's a good land, but not a great one. The third ability is completely worthless and shouldn't be on the card - or it should be better. The second ability is good, and the only reason to use the card - but ultimately falls short. Why can't that colored mana it be used for all spells? The first ability is alright - ultimately making the card more comparable to a Filter land (i.e. Cascade Bluffs). I'd play test it if I thought it was a better card overall.

Now why on Dominaria would I cut a bunch of lands to make room for basics? What do you mean the ramp won't work well without them? You can't just give such cryptic advice and not explain your logic.