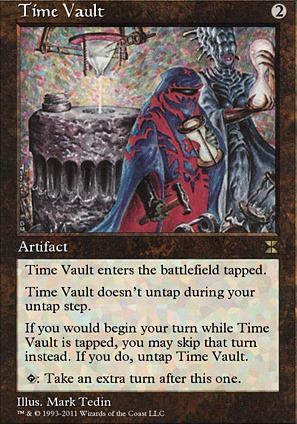 multimedia making it hard to give suggestions again lol. So, I've brewed this guy up before as sort of a troll on one of the guys that plays at my lgs - Seedborn Muse and Wilderness Reclamation are absolute must have. Quest for Renewal fills a similar roll I'd actually increase the amount of dorks your playing. Priest of Titania, Elvish Mystic, Boreal Druid, and Fyndhorn Elves will all help you get out your commander stupid early. Utopia Sprawl and Wild Growth are basically elves in enchantment form. Sol Ring, Arcane Signet and Fellwar Stone put in work too. As far as your control package Rapid Hybridization, Pongify, Reality Shift and Beast Within give you some removal incase something slips through your counter magic. If you get a Seedborn Muse engine going Spell Burst or Capsize can give you a soft lock on the game.

MagicMarc on Why is there not a â¦

Capsize is actually my #1 favorite blue card of all time. It's like the blue Lightning Bolt. I will find any excuse to put it in a deck.

Massacar on Why is there not a â¦

MagicMarc definitely don't disagree that bounce and phasing don't necessarily cover the wincons of certain decks, but it can encompass the main strategies/mechanics of a deck.

Just adding onto your Cyclonic point, Capsize is a pretty powerful bounce tool that I see used a decent amount as a mana sink.

Could also consider Stream of Thought as a mill win con. You can run Dizzy Spell as another way to get Stream. Make infinite Mana using your combo and then replicate the Stream as many times as you need to to mill them out then pass turn.

Also, You run Mnemonic Wall already so why not run a flicker combo? Mnemonic Wall, Sunscorched Desert with Ghostly Flicker after you make infinite Mana.

One more suggestion, Forgotten Cave and Lonely Sandbar are strictly better than the desert cycling lands you are running.

As I noted in my previous post I would seriously consider running Capsize. I would take out Blink of an Eye and replace it with the Capsize.

Lastly for now, You should run Neurok Stealthsuit. It keeps your CMDR from getting roasted and can be attached at instant speed. Making for fun shenanigans when someone tries to blow your League up. Just attach in response and hopefully they don't have a followup spell. I would cut Ur-Golem's Eye and add the Stealth suit.

Oh, one more thing. Get rid of Manalith and put a Bonder's Ornament in there. Drawing cards is good. Way better than Manalith.

I would change the creature base up a bit too. There are way better crits out there that you should look into.

Have you considered running Capsize? I think it another infinite mana win con and its nice being able to capsize 2 permanents for 10 mana instead of 12 with League's ability. 2 perms per turn is really strong. I have been considering building a League pEDH and Capsize was an auto in for me.

I think Sublime Epiphany has potential for the reasons I mentioned before, but I'll keep an eye on the card in case it ends up underperforming. 4UU is a steep cost to pay, but I think the modes available are great and mesh well with the deck.

Norn technically isn't that integral to my strategy, but she's good for going on the offensive and keeping other boardstates in check.

I've currently replaced the Altar of Dementia + Karmic Guide + Reveillark combo to try out Peregrine Drake and Capsize. I'm pretty uncertain about this considering the combo isn't searchable (save for Capsize with Mystical Tutor), but the other combo always felt too telegraphed or mana intensive if I wanted to pull it off in the same turn. On top of that, Reveillark and Altar of Dementia always felt like dead cards without the Karmic Guide. At least these cards can somewhat stand on their own.