Whenever an artifact is put into a graveyard from play, you may have target opponent lose 1 life.

Disciple of the Vault occurrence in decks from the last year

Turns of the Hegemon
by mistarilledawn 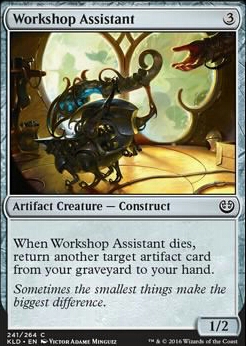 Disciple of the Vault Discussion

Mj3913 not sure Marionette Master, Disciple of the Vault or Summoning Station would work as treasure/gold and food tokens are tokens so they don't go to the graveyard

An Aristicratic approach may be the best. Things like Marionette Master and Disciple of the Vault and Reckless Fireweaver. There's more I'm sure...

Not sure if Summoning Station would be of interest to you? Also there's things like Vermiculos and Glassdust Hulk that build up on artifact etb... Storm the Vault Â Flip if you have X spells. Kinda all over the place color wise but nothing's decided yet so never know.

DarkHero on The Best Black Common

Disciple of the Vault is amazing, Tragic Slip deserves a little recognition.

enpc on The Best Black Common

Disciple of the Vault is pretty dope. Not only was it a staple in Mirrodin block, but it also sees play in some vintage and commander lists, even at higher levels of play.

PitaGryphon definitely not. I wish, but that would definitely not be enough to revive affinity, especially now that Mox Opal is banned. Unfortunately, the deck is outclassed by everything else happening. Adding one decent synergy would not be enough. Besides, the blowout potential of cards like Vandalblast or Shatterstorm destroying all permanents is a real risk for an affinity deck.

I think Disciple of the Vault might be the scarier card alongside artifact lands. But I didn't play standard in those days and don't know how strong the deck actually is.

sharuum + Phyrexian Metamorph + Disciple of the Vault -metamorph can be any artifact copy effect like Sculpting Steel for infinite damage.