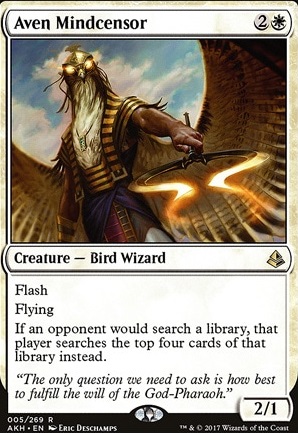 If an opponent would search a library, that player searches the top four cards of that library instead.

"stax is viable, and relies mostly on artifacts for most locks."

There are still a crap tonne of white stax cards. From Linvala, Keeper of Silence to Aven Mindcensor and Spirit of the Labyrinth, these are used to slow the game down to White's speed.

If you then look at where white wants to play:

And as a general rule, white focuses less on winning hte hand game and more on winning the boardstate game. That's why there are so many white midrange cards that are just pure value. It's part ofthe reason why Brightling is placed where it is on mana cost.

I think the big issue here and where there is going to be the biggest disconnect between my opinion and a bunch of others' opinions is because of EDH. White and to a lesser extent red both suffer when the goalposts are moved from a two player, 20 life format to a 4 player, 40 life format. I'm not going to deny that. As someone who has a mono-white Balan, Wandering Knight deck, I do know the struggles that mono-white can feel.

But the issue is that you can't just look at white in the context of one format. Any cards that you're creating here which would undoubtedly make white better in EDH would tip the scales too hard in white's favour in all of the other formats that had the cards available. Or the cards would be crap and unplayable to to the point where they wouldn't help the EDH decks anyway. And look, I've heard some thoughts about cards that scale with the number of opponents which would be the best fix if one were needed (as to have the least impact on the other formats) But I just don't think that they're required.

In addition to this, I don't think that the points I have made undermine any of my previous points. Yes, mono-white in EDH has some defecits due to the format change, however a lot of the stax effects hurt all opponents equally, so they still work pretty well.

But it's important for EDH-only (and especially casual EDH-only) players to keep all of this in mind - any new cards you add will affect other formats. So while EDH is definitely a popular format, it should not dictate how white works.

Roryesquire: At the end of the day, if you like it then that's fine. But if you're looking at streamlining the list (since you posted here asking for help), then these are things that will hold the deck back.

Brago, King Eternal may be able to flicker planeswalkers, but the walkers you are running don't really have big impact negative abilities. Ashiok is probably the best there and if you're running Brago primary to flicker her then it seems like a waste. And sure, you can flicker Dockside Extortionist but again, if that's the best thing the deck does, it feels like a wasted slot. Not to mention the fact that most of your card advantage requires you to cast legendary spells, not just ETB them. Also, Brago and Master of Cruelties is a nonbo - you can't attack with both at once. I also fail to see how Brago helps Sisay in a voltron capacity.

I get that the OG duals work well with the fetches (which is why basically every competitive deck runs them together), however my point was that running Nature's Lore, Three Visits, etc. takes even more advantage of them. You're basically saying "I guess I've gotten enough synergy out of these lands so I will stop there" when you could get even more value. In additon to that, if you're running Blackblade Reforged then that's even more of a reason to be running land ramp rather than artifact ramp - you get a bigger buff faster.

Thran Temporal Gateway should not be the justification for you running Progenitus. Sure, if you have gateway in play and then draw into Progenitus then it's not bad, but outside of that it's a big, clunky setup for a 4 turn clock on a player. Ulamog, the Ceaseless Hunger or Ulamog, the Infinite Gyre are both 4 turn clocks and do so much more (not to mention are much easier to cast).

In addition to the above, if you're going for a stax build, you have missed a bunch of primo stax pieces like Aven Mindcensor and Drannith Magistrate.

As I said, it's your deck and you have to be happy with it, but I think that it is rather disjointed in its current state.

I've made a few changed to the deck in an effort to lower the mana curve and also include some more hatebear elements to try and slow down the game to give me more time to catch up.

Baral, Chief of Compliance, Glen Elendra Archmage, Hall of Heliod's Generosity, Thornbite Staff, Grand Arbiter Augustin IV, Grand Abolisher, Aven Mindcensor, Narset, Parter of Veils and Ashiok, Dream Render are some cards that immediately comes to mind. I would build this deck with the purpose to suffocate my opponents entierly. Ah and also Deafening Silence and Decree of Silence with Solemnity.

Just be aware, your playgroup might hate you after game one tho...