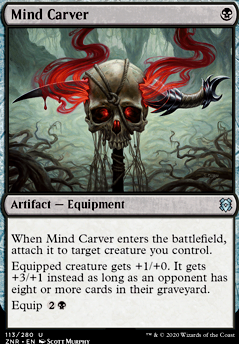 Is lacking draw, after initial hand was dumped i had trouble finding more cards.

Should add cards like Wheel of Fortune that refills.

Narset, Parter of Veils - just trust me and try it. The slow grind is very satisfying. Windfall, Winds of Change, Dark Deal, Reforge the Soul and Wheel of Fortune are snap includes if you have them. Personal Tutor and Mystical Tutor are both awesome for consistency. Oh and Narset's Reversal is an absolute banger if you have a Library of Leng

rkjunior, I made a few adjustments and I'm going to roll with 35 lands for now and see how that feels. That was the same amount I ran in Omnath, Locus of the Roil and never really had an issue with it.

Cornelius_1216, the deck has even surprised me with its performance. This isnât anything competitive by any means, because I wanted something that would be fun for me to pilot, but the deck can just blow up out of nowhere on turns 4-6. Iâm glad you were able to find some stuff out of my brew to include to yours. Feel free to send me a link to your Omnath, Locus of Creation. Iâd definitely like to check it out!

Metachemist, I am definitely on board with cutting Nissa, Vital Force and Echo of Eons for Enlightened Tutor and Worldly Tutor. Felidar Retreat I wanted to give a shot, but you do make valid points and I can make the cut for Fierce Guardianship. I think I might opt for Deflecting Swat over the other counter cards. Though I would need to cut something else over Wheel of Fortune. That card has disrupted my opponents hands and giving me a desperately needed full hand many times than none. Iâm definitely open to more feedback from you.

So I have some more suggestions that I think would help tighten up the deck a bit, it leans it more towards combo/control but hear me out.

Cuts: Nissa, Vital Force it's good and it's synergy but I think we can do better.

Wheel of Fortune I know that draw is an issue for you but! I think this and Echo of Eons better fit in a deck that want to take advantage of the parity of up to 3 other opponents drawing that many cards.

Adds: Fierce Guardianship tapped out from a big turn but couldn't quite close out the game? Would a Wrath or Counter really wreck your plans? Tell them to bugger off.

Force of Will or Force of Negation See above.

Enlightened Tutor and Worldly Tutor we don't need to draw as much if we draw exactly what we need. (insert head tap meme here)

Valakut Awakening Â Flip is cool but it is not as strong as the almighty Wheel of Fortune or its more affordable cousin Reforge the Soul. I do like the idea of having more utility lands in the deck though!