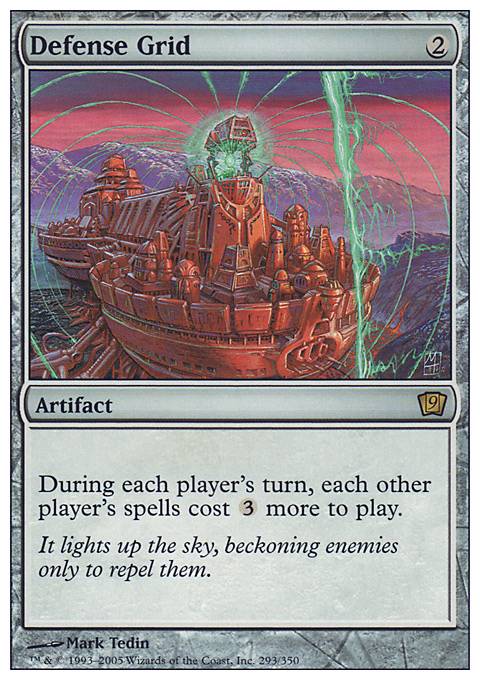 Each spell costs (3) more to play except during its controller's turn.

Defense Grid occurrence in decks from the last year

Hi everyone. I play the same deck and I find it very strong :) I recently made some changes due to the new cards released, which are going to create a lot of problems for our beloved commander goblin. Let me know what you think ..

Sanctum of Eternity out - in Strip Mine

Darksteel Citadel out - in Wasteland

Sanctum of Eternity is a valid card, but the fact that we can return our command to our hand only in our turn makes it a little less strong. Cloudstone Curio already replaces it at best. Strip Mine and Wasteland allow us to eliminate lands that create problems for us (for example The Tabernacle at Pendrell Vale) or protect Cavern of Souls or Homeward Path from other lands that destroy lands.

Mogg Catcher out - Expedition Map in

Mogg Catcher is slow and it is often difficult to make the best use of it. Expedition Map allows us to tutor land cards as needed: do we have to destroy a land? Tutor Strip Mine or Wasteland. Do we have to be immune to counters? Tutor Cavern of Souls. Do we have to get the commander back in hand? Tutor Homeward Path. No mana red? Tutor land for mana.

Goblin Chirurgeon out - Abrade in

Last Chance out - Deflecting Swat in

Abrade provides more combat flexibility (also to deal with the feared 3hp body Drannith Magistrate). Deflecting Swat is a must in every red mono both in defense and attack (you can delete some black tutors :)), unlike Last Chance which is unfortunately a bit slow since it is a sorcery.

Price of Glory out - Defense Grid in

Price of Glory is valid, but it does allow the enemy to play spells using mana ramps. This makes it immune from land loss. Defense Grid always complicates the opportunity life. And for this it is simply stronger.

In an Avacyn deck, the main problem you're facing is getting her on the board and then keeping her there. We would therefore recommend you think about the following cards:

We hope you enjoy this feedback. Have fun with the brew. In case you are curious, here is our Avacyn deck.

Rasaru there is an Upgrade mention in one of the sections

The great thing about this deck is that you can tweak it to be more aggro, control, burn-oriented, etc. I've been taking the control approach by adding Sphere of Resistance, Ensnaring Bridge, Metalworker (as more ramp), Defense Grid, etc