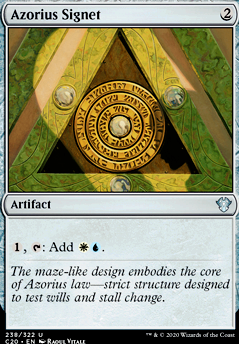 Azorius Signet occurrence in decks from the last year

The biggest thing I see here is you have a lot of lands. Usually 40% is lots, but depending on how your deck curves you can adapt that a bit and supplement it with mana rocks like Arcane Signet, Azorius Signet, Mind Stone and/or Fellwar Stone. My buddy built a strong Hanna deck and he uses her to recur things like Hedron Archive and Burnished Hart after heâs sacked them so he can always be ramping, or in your case spamming birds. You could use Divine Visitation too to help you break some parity once you drop Dovescape too.

Hey dude, couple of recommends & questions, at 2 mana both Arcane Signet and Talisman of Progress are better than Azorius Signet, and also Frozen AEther is another Kismet effect, but blue so it has upsides if you keep on improving the deck.
How good has Thassa's Intervention been for you? I'm interested in trying it but it seems somewhat high mana for only a slightly good effect.
And how often does Castle Vantress get to activate?

crewchief88 Alela wants the Hall of Heliod's Generosity in there. not in Elsha. Alela is the artifact/enchantment chick in esper. So she really could use it more than Elsha can. I play tested your deck 6 times to turn 7 and only 1 time was i able to go off and win before then. That was turn 4 on a really good hand.

I would do some testing and working with the deck a little more, tweaking and ironing out the issues that you may have. (I noticed a HUGE problem with mana. You arent running signets, or all the talismans, so your fixing isnt there. That may be why you have some problems in the deck)

Azorius Signet Izzet Signet Talisman of Creativity Talisman of Progress Mox Opal Mox Diamond all should be future investments into this deck.

After further evaluation Library of Leng should not be in this deck. It's a cute card that does nothing for you right away in game. And discard decks are only if you are going against decks like Nath or Nekusar. (My baby Nath sadly can't keep up to my Elsha list.)

I think you rely too much on the effects of wheeling your way to a victory when you need to be letting Elsha do all the work man. She's a house. Throw in Rogue's Passage to sneak a few beats in there. Swiftfoot Boots is another card that she should be running to protect her. You don't want to give your opponents any opportunities to kill your commander when you are tapped out. Elsha, much like other storm decks, relies on the commander. For example: If Kess was not in play, the Grixis Kess Storm deck wouldn't function 100% of the time. I've done some testing on that.

Also, while I'm on the topic. SAY NO TO CODEX SHREDDER. It HAS TO GO. Its a cute card that if you want to win, you play around what people tutor. You know what they are tutoring well ahead of time so you can stop them with what counter magic you have.

You also don't care if they use Tabernacle because you only use 1 creature. Everythign else does value on ETB.