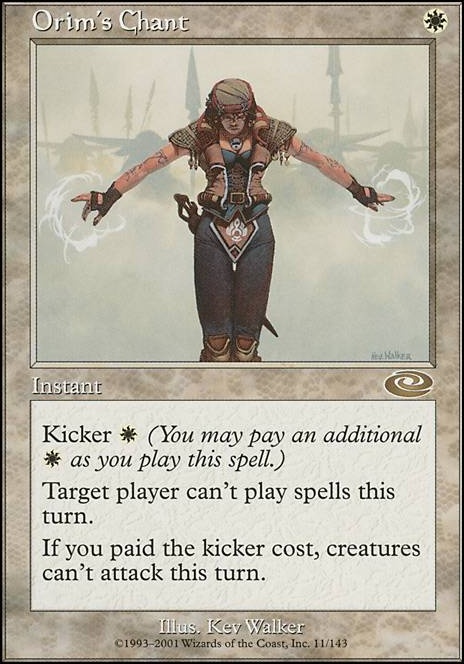 Kicker *(You may pay an additional as you play this spell.) *

If the kicker cost was paid, creatures can't attack this turn.

Orim's Chant occurrence in decks from the last year 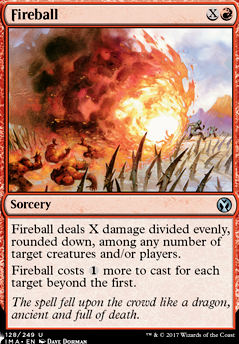 your fate is sealed: Triad of fates flickerfort
by snakekill321 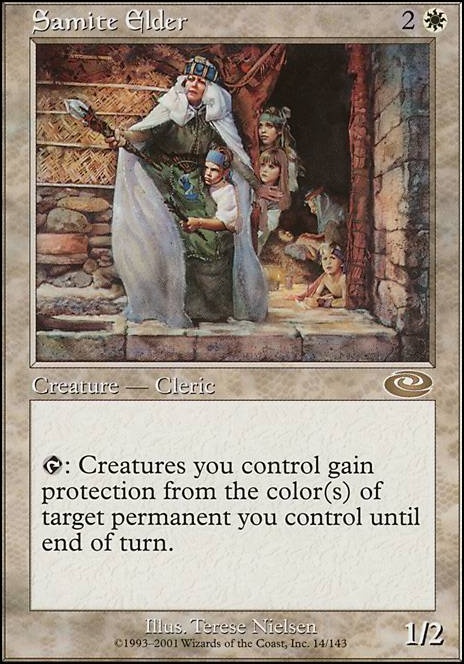 Mangara and The Failure of Diplomacy
by sickfreed

Join our discord server, you will get much faster responses.

Nevermore is generally not a card you want to be playing, unless it is a tech card into a meta where people are running the same wincons or something. Otherwise, you really don't want to be paying 3 mana to make someone else not be able to play a card. The best way to counter the card is to add more artifact and enchantment removal spells, then it should be totally fine.

on Peacekeeper, Glacial Chasm, Crawlspace and Silent Arbiter: You don't really need these kinds of cards in cEDH, unless you are playing specifically against decks like godo, najeela, or other combat-centric commanders. You could then add one of those cards in accordingly. I also think that Orim's Chant does the jobs just fine. Peacekeeper hurts really bad because it is constantly costing mana on top of the already high price of 3. If anything, I would maybe go with Glacial Chasm since you can tutor it up.

Phyrexian Revoker being able to hit mana abilities is everything. It can stop Food chain combos and other mana producing combos which are starting to become a lot more popular.

I mean, the main problem with Orim's Chant is that non-targeted OPs can still counter your stuff. Silence is good because it protects you from everyone.

Thoughts on Orim's Chant? Worth/not worth? It targets an opponent who is trying to interact and stops other potential combos. Its like Silence but for one person and can stop attacking if need be.

enpc on Best Counterspells in Commander?

It entirely depends on what you're playing against. If you're going up against creature heavy metas, you want counterspells that can deal wiht more options. But if you're mainly just trying to stop a player from comboing off (or protecting your combo), cheap, non-creature counterspells are the way to go.

And generally at higher levels of play, Cryptic Command doesn't get run - 4 CMC and trip blue are just too high a price.

As a general rule though, Swan Song is an auto-include in most control decks, Muddle the Mixture is good if it can interact with your win condition (i.e. if you're packing Isochron Scepter/Dramatic Reversal or similar) and Flusterstorm as mentioned is strong.

If this isn't for cEDH, then Disallow and Render Silent are some cards I would lean into since they give you catchall answers. Don't forget you also have stuff like Silence and even Orim's Chant which aren't counterspells but can be used to shut players out of a turn. I also like Mindbreak Trap against storm. It's expensive as far as counterspells go but it's also really good at shutting down uncounterable stuff.

Also worth mentioning, if you're looking to pack a bunch of counterspells, you should also have a proportionally high amount of card draw, especially if you're playing a control deck. Becuase most counterspells are one-for-one, without a good card draw engine you will quickly flounder.

Isochron Scepter and Orim's Chant would make good additions to this deck.

That's an awful lot of high-mana creatures you're running. I can see the idea behind the deck, using Orim's Chant to stall the opponent while you get mana for some of your creatures, but I don't think 4 copies of chant is enough to significantly influence that.

You might add a few Silence in addition to those Chants to lock the game down even further. Another way to add mana ramp for Boros colors is to use Knight of the White Orchid and add in some dual-color lands that qualify for his fetch ability such as Sacred Foundry .

Additionally, you can also use red mana-generating instants like Seething Song .

Hopefully this gives ya a few ideas for some more non-creature spells if you want to play with Prowess abilities some.

@DespairFaction: You cannot compare geddon effects to Cataclysm and Jokulhaups . The latter are late-game combo pieces with Teferi's Protection , Boros Charm and now, Brought Back . They're our go-to spells when the game gets out of control. As you correctly pointed out, geddon effects are proactive--they're resource denial spells, much like Ruination , Blood Moon and Magus of the Moon . I've talked about them before and why I do not play them. I prefer the one-sided nature of Ruination and because it doesn't require us to have a board presence to hurt players with high-tiered, 3-, 4- or 5-color decks. In addition, my experience is that moon effects will accomplish the same thing (resource denial) more effectively (they don't require board presence to take high-tiered decks out of the game).

Regarding Smothering Tithe , here's the reply that I gave to another user who asked me the same question: "The card ramps like crazy because no one ever pays for it (unless 1v1'ing or 2v1'ing) and has pretty good synergy with Akiri (each treasure is a +1/+0). That said, unless you have a reliable way of spending the mana it generates, the card is only okay. Say, if our commanders had an activated ability like Thrasios, Triton Hero , this card would be very good because it would allow us to use the mana to generate card advantage. However, that's not the case and this makes me very reluctant to play smothering tithe here. I've no doubt that frenzy takes precedence over smothering tithe in any boros list. Our main issue is card advantage and we need all the help we can get to generate card advantage, not necessarily ramp. However, it also works pretty well with jokulhaups, so that might be something to consider. I guess I'll have to test it at some point." I've not tested it yet. The option you mentioned to find it with the enchant tutors is unrealistic. If you can search for enchantment, your priority will usually be something like (1) Blood Moon (resource denial) or (2) Grasp of Fate (removal) or (3) Land Tax (land tutor for card draw engines) or (4) Outpost Siege (card draw) or if none of that matters, (5) Smothering Tithe (ramp / combo with draw seven).

Chaos Warp is garbage. Please do not play it.

I do not play Orim's Chant . Think you were trying to say Orim's Thunder , which is an instant speed 2-for-1 spell. Highly undervalued and underplayed in multiplayer edh. That's quite far from being an odd card choice in a RW list.

I agree with your observation about how the deck should be changed depending on the meta. This was pointed out in the description and in previous comments.

Let me know if you put together a proper alternative version of this akiri-bruse, aggro-control list. I'd gladly mention it in my description.