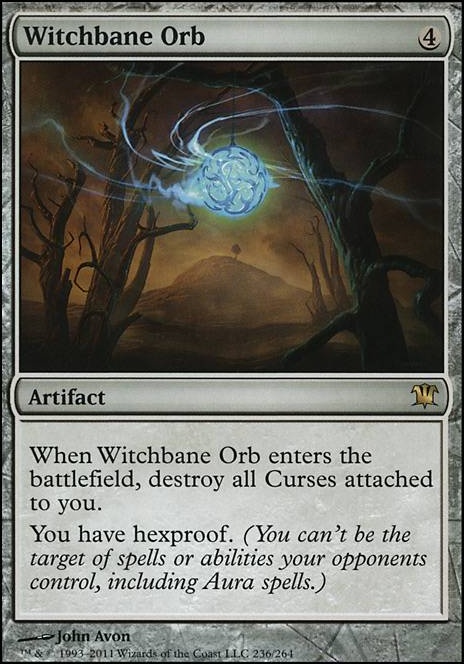 When Witchbane Orb enters the battlefield, destroy all Curses attached to you.

You have hexproof. (You can't be the target of spells or abilities your opponents control, including Aura spells.)

Witchbane Orb occurrence in decks from the last year

Siren Stormtamer works fine for me alexjustdoit. Or you could go with something like Witchbane Orb in addition if your meta is heavy on gravehate

also Orbs of Warding and Witchbane Orb is good against Bojuka Bog like effects, that target the player instead of the graveyard.

Hey thanks for testing! Lantern has always really seemed to have issues with burn and mill in general. I have since added Witchbane Orb to my sideboard to combat burn/mill type effects. It's also fetchable by Karn, the Great Creator. Glad SSG worked out for it's purpose!

DemonTeddy Thanks for the testing! The new version (just going back to BG with the 4x simians) is looking much better. Scheming Symmetry has a potential to be an absolute beast when paired with the "discard off the top" cards and then with surgical, it can basically wipe out a player's wincon around turn 2. It's also good for fetching our own pieces.

I'm not adding any extra Spire of Industry, but I am adding 3x Overgrown Tomb just so I can always have access to the colored mana and only lose 2 life on turn 1 to get it.

I would love to get Leyline of Sanctity to work, but I just don't think the mana curve could support it, especially with Opal gone. I could use Witchbane Orb in its place. I might stick Orb and a Leyline of the Void into the sideboard.

I would love to get Karn, the Great Creator in this mainboard.. Maybe as a 1-2x and have 1x of all of the lantern combo pieces in the sideboard for Karn to fetch, but we'll have to see on that.

If my opponent has Leyline of Sanctity or Witchbane Orb can I still exile their graveyard with Bojuka Bog or Tormod's Crypt ?

@abbatromebone I agree... maybe Veil of Summer mist be the "new" or "better" option for Turbofog over Dispel / Negate ...can also slap down Thoughtseize so i like that a lot... or perhaps just in the SB along with the others depending on the matchup... ill look into it for sure.

currently this is what my sideboard is shaping up to be

4x Beast Within For addressing resolved permantants that just need to go... i figure the 3/3 token should be completly negated in turbofog so that should be golden removal in theory.

2x Mindbreak Trap I think could be good to just slow down anyone with lots of cantrips or stormy decks.

2x Torpor Orb for keeping my Whelming Wave useable/useful against people getting advantage with ETB value.

2x Witchbane Orb Budget Leyline of Sanctity (which honestly is a lot more affordable than it was a few years ago... wow)... try to stave off burn/hand disruption.

May be Kiora, Master of the Depths could also help out with Genesis and Spore Frog ?... and if i splashed white i can see the possibility of integrating Kami of False Hope too...I currently dont think this is the way i wanna go because i really wanna try to stay simic for budget reasons (mostly mana base issues); but definitely an idea to be explored.... ill work up a theoretical "fog re-animator style" decklist and see where the price tag would end up.