When the hatebears are out, we can sit back and relax for a while! In a stax deck it's important to keep the hate tuned against trends. The current meta is plagued with Treasure tokens, 0-cost mana artifacts for Turbo Ad Nauseam or Underworld Breach strategies and even semi-auto-win commanders (Codie, Vociferous Codex). You know what, let's blank 10+ cards per deck! Full artifacts-hate mode on!

The deck main decision points are: which hate bears to look for, when to stay back with interaction, when to try and push for the win. 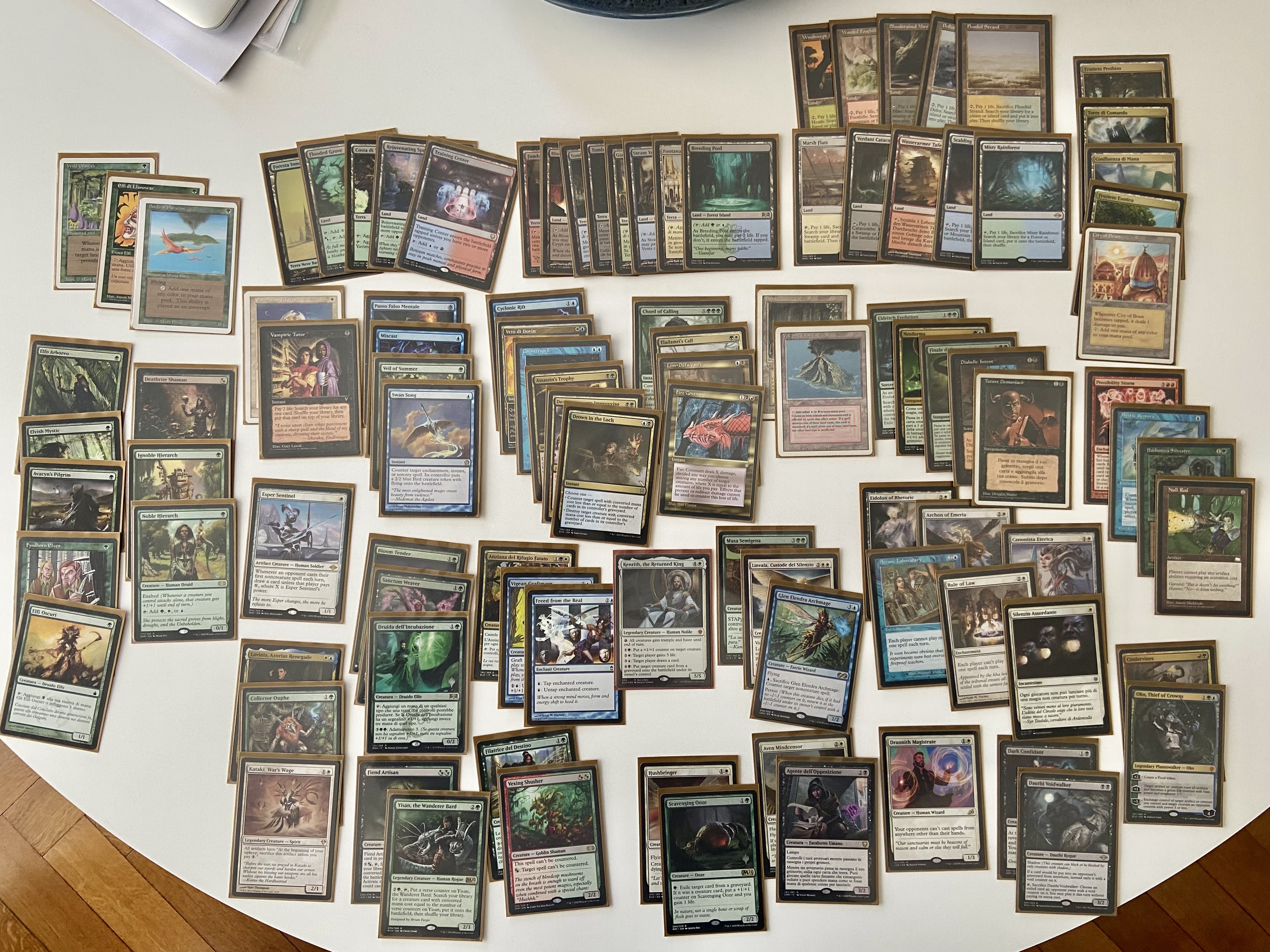 The main strategy of the deck revolves around hindering your opponents and making very difficult for them to execute their job. The hate pieces are very meta dependant, the ones in the current list make sense in an Ad Nauseam, high mana rocks and tutor density, Thassa's Oracle meta. This means that this list probably has difficulties actually fighting a moderate power level! So keep this in mind and tune according to your meta.

The Book of Hate

Basically we acknowledge Thassa's Oracle is out there. If it's composing the most of your meta, you may want to add some other similar effects.

Another important set of abilities to switch off is.. dork-based mana! In the latest months also commander activated abilities like Codie, Vociferous Codex became important to target. Thus of course we run the classic stax piece:

Commander and Cards from Exile

The magistrate is a ridiculous card, stop all decks requiring to cast their commander but also stops strange shenanigans with cards in exile. Finally, the list also runs the hard lock of Possibility Storm, it's a 2 card combo which makes impossible for opponents to cast spell and they have to solve the board state with what they have. Oko is there to Elkify commanders, keep in mind that once elkified a commander will try to into suicide missions, so it's more a temporal solution plus the random steal happens from time to time.

Notion thief is important to stop wheels and multiple card draws like Sylvan Library or Rhystic Study. In the right meta these cards can be back breaking. My current list is not running them because under Rule of Law drawing multiple cards is not as bad (they'll draw into an answer eventually though, so this may still be a good idea)

Remove cards from the game or avoid they end in the grave, very important against Underworld Breach+Brain Freeze shenanigans

Mess with your opponent searching

In high power pods counterspells have to be expected, from our point of view it's important to deploy key hate pieces and eventually protect our combo later on.

Glen Elendra Archamge and Rhythm of the Wild are a soft lock together which gives plenty of counterpower. The rythm is a bit of a clunky card, I slot it in and out with Shusher or Spinner.

Brain Freeze is gaining momentum lately thanks to Underworld Breach, other Turbo decks tend also to draw a bunch of cards and play rituals and fast mana to power their Thoracle. Therefore we need some form of attrition for those scenarios:

Rule of Law (RoL) is one of the strongest stax pieces which stops a lot of decks. If following that route, at least these cards should be included:

One of these cards should be a prime target to have in the starting hand or to tutor for! Kenrith, Oko and creatures with abilities naturally work very well under RoL, allowing this deck to find the pieces it needs and introducing friction for other strategies at the table.

A King must collect taxes! There are two main ways of playing this deck, one is pushing for Rule of Law effects, the other is pushing for taxes. ROL is usually considered stronger but also it brings more salt at the table..

Taxes and ROL don't work well together because under RoL, since everyone plays 1 spell, it's easier to pay for taxes.

This version is running a bunch of tax effects, from the staples to more exotic ones:

0 wins 3 losses. Not exciting but sometime this is magic! There were not enough players and there was a table with 3, I had the luck of always going in the table with 3 players, which especially for this deck is not really good. Finally 2 tables out of 3 had very strange decks for which the stax was not tuned for.

Table 1, T&T, Karamax. The stax comes out fine, I think I lost when I tapped WW to play Linvala in order to stop Thrasios, at that point there was a RoL effect in play and a Lab Maniac. I had Dovin's Veto in hand. I think to myself, the kalamax player will not tap out and guard with a counterspell that labman, but he decides not to and taps out in my EoT. The T&T player had the Consultation in hand and kalamax player didn't really think it through and also failed to remove the Labman in his turn, passing and T&T wins with natural draw.

Table 2, UB Zombie, GR Goblin combo. Not much to say, I have no idea what those decks were up to. The RG deck has plenty of creature removal which kills my mana dorks. I probably throw away too many of them. The UB zombie is not playing anything. This is a classic table where the stax will not work at all. Somehow the goblin player wins.

Table 3, Tharsios Kraum big mana taking turns, BG saprolings. BG saprolings sits there and gains life, Thrasios Kraum counters everything I do. Linvala and some other bears manage to bring K&T down to 13 before being wrathed away by some pyroclasm effect. The deathmatch bells sounds, K&T expansion//explode me to 0 but then can't manage to hurt the saprolings player enough, who wins for having more life. Such is magic.

Final Thoughts: this deck needs to play against decks that it is designed to battle with, bringing it to a random meta was a poor choice!

cEDH 4 Color Control (but with white this time)

Just Taking my Praetor for a Walk