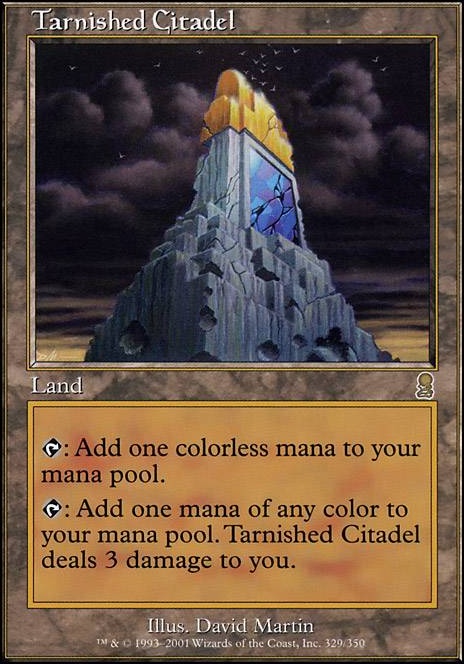 Tap: Add one mana of any color to your mana pool. Tarnished Citadel deals 3 damage to you.

After playing, I think you may want to refine the payoffs you run and have a more streamlined ramp package. WUBERG is an interesting ramp but there are a few key things for mana fixing you can run such as The World Tree, Mana Confluence, Tarnished Citadel, City of Brass, and the cards like Urborg, Tomb of Yawgmoth and Yavimaya, Cradle of Growth to mana fix your other lands. there are also tapped WUBERGs like Rupture Spire. fetches + dual lands is also a very consistent mana base.

on the ramp front, you may likely want to lower your curve down. Even though you can semi-free cast once you reach it, you don't want to be in the situation like you had of having 8 cards in hand and them all being huge payoff cards. I would also strongly urge you to ignore the casual/competitive slider for deck tuning.

Thanks again for stopping by my list. Nice version you have going! Looks like fun to combine the janky combos with rattlesnakes and politics through Marchesa.

Here are some cards I expected to find here but didnât :). Perhaps some of them are of interest to you:

The fuck is a life total?

By the old gods and the new

So, you may want to finish your land base and give somewhat of an indication on what budget your on. Even a casual 5 color deck can have a hefty price tag due to the land base needed for consistency purposes.

Duals>fetches>utility pertaining to your strategy/shocks>rainbows>horizons> Pains>fast lands> anything beyond this is probably played due to budget restrictions or it's just laying around.

To a lesser extent Unclaimed Territory, Cascading Cataracts, Gateway Plaza, Rupture Spire, Transguild Promenade and you could probably use this but won't need it Cavern of Souls - its expensive but provides such a great utility to really stick it to control players.

If you're on a very tight budget and don't want to spend a lot on lands - though I HIGHLY recommend fine tuning a land base over running these cards but they ensure you'll be able to get activations off; Chromatic Lantern, Chromatic Orrery, Prismatic Omen and Joiner Adept

enpc on A Spicy Land?

Currently you will take a maximum of 6 damage to use the land. That's very good, given that Tarnished Citadel sees play. I think you need to make it balanced, either by adding more counters or adding more restrictions.

Gontilordofmtg Thanks for commenting! I feel the life gain card are pretty important in this deck as Phyrexian Arena, Bitterblossom, Ancient Tomb, City of Brass, Mana Confluence, Spire of Industry, and Tarnished Citadel all do damage to me or make me lose life, and having that life gain cushion is important.

As for removal, a friend of mine always says "A fun commander deck is all questions and no answers", so all of my decks tend to just be very selfish and try to get ahead as quick as possible rather than worrying about other players decks.

However, I do have two ways of removing things, Capricious Efreet and also Dominus of Fealty + World Queller let me do this fun thing where I take any permanent and then immediately sacrifice what I took with the World Queller trigger.

I've considered adding the red siege enchantment, but I typically rely on Golos and hardly cast cards from my hand, nor top of the deck.