Ooops, I Did it Again!
by AromontTheDruid 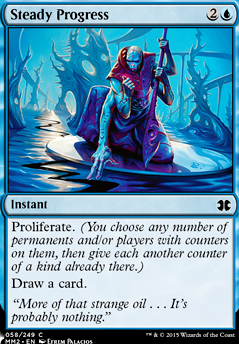 Looks super fun to play. You've even got Shaman of Forgotten Ways which I love in decks like this. If you see many counterspells emerge to combat this deck then a Vexing Shusher might come in handy.

I've been trying to figure out a version of this where you play around Blood Funnel - you lock out a lot of lists entirely. Its also neat in that it speeds you up - if you can meet sacrifice requirements. Funnel -> Harmless turn three is really good, while 'can't be countered' effects bypass it completely - Vexing Shusher/Boseiju, Who Shelters All gets its spots mainboard.

I agree with Vexing Shusher, in 2v2 it is even better because you can use it to make your ally's spell uncounterable too. You could also look into Rhythm of the Wild and Destiny Spinner for more anti counterspell. Mayhem Devil takes advantage of your combo as well since you can just sac the tokens after making as many as you want. You can even use it as an anti combo for your opponent since it triggers on their sacrifice's too. I based my Prossh deck off of Necrotic Ooze but I run Food Chain in the deck as backup. Necro Prossh if you want to give it a look.