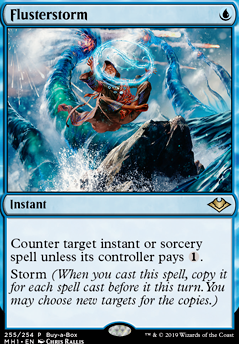 It was not my intent to "get you", much less on a technicality. I was merely pointing out that a single Stifle would work and Flusterstorm wouldn't. Whirlwind Denial (after the Gravestorm ability resolves) would also effectively hard counter the line of play as you mentioned. It is a really cool interaction for a rarely used card, I just wanted fellow Hapatra players to be aware of what works and what doesn't when an opponent tries to stop it.

Default sorting by color is so cursed

I'd cut down on the number of Newts or Cauldrons to maybe 2 each. Since you have 4x Witch to tutor them, you really don't need that many, and this will lower the chances of drawing dead cards and let you fill the slots with something better.

Another witch that is fun in UB control lists and fits with the witch theme is Sedgemoor Witch. Floods the board with tokens that gain you some life. Also a lot of fun with Flusterstorm.

Instead of Thought Erasure I'd use Dread Fugue if you can't afford Thoughtseize. Having that 1 cmc is just super important since you can get rid of a card on t1 and leave t2 open for a counterspell.

Maybe put in Flusterstorm and take out Cancel? I know that you'd have less targets, but it's only 1 mana spent (as opposed to 3).

I feel like countermagic is the way to go! It's not dead outside of protection, there are some efficient options in the format, and you're in blue... seems viable.

As far as options go, Flusterstorm, Miscast, Spell Pierce, Swan Song, even Turn Aside work for your situation.

You dont happen to have a Mystic Remora you would be willing to trade do you? I am also really looking for a Flusterstorm, Dauthi Voidwalker, Mesmeric Orb, and Leyline of Anticipation. I can forgo the Ashaya as i am not really looking for the extra cost of the full art, but any of the above if you happen to have them I would be very interested in for sure, if not, I am sure we can work something out at least for the opp agent plus something for either of the cards you requested. Looking forward to hearing from you.