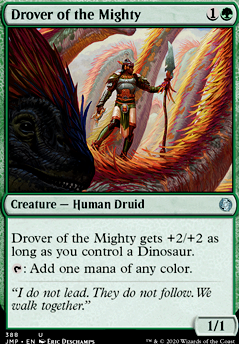 Drover of the Mighty

Drover of the Mighty gets +2/+2 as long as you control a Dinosaur. 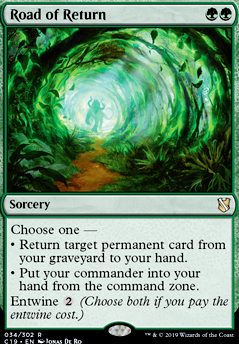 Drover of the Mighty Discussion

(Klefki) and Drover of the Mighty

Klefki was the best choice for the Pranksters because Klefki is fairy type, has the Prankster ability, has moves which protect allies similar to Pranksters' effect, and Pranksters' flavor text is about a "faerie ring". So yeah I will fight you if you try to tell me I picked the wrong poke for this one.

Drover of the Mighty's mtg art reminded me of Brock and Onix, so that's why I chose Onix for this one. I may foil-peel a Brock card and stick him on there. Thoughts?

Interesting article - thanks for that!

It's always tricky adjusting decks so that your main plan happens.

Getting Ghalta, Primal Hunger on the field ASAP is the main goal, and that happens faster with other big Dinos, than it does with Knight of the Stampede

Bigger Dinos also let this deck hold on, before Ghalta hits the field.

StuBi hates decks that are more than one colour, so splashing isn't going to happen.

It would also lead to more expensive cards and/or a slower deck. Since the meta is fast at the moment, that isn't going to work.

I have incorporated Drover of the Mighty , which is a great suggestion, from the article.

I donât believe Drover of the Mighty dies to Marauding Raptor. The plus 2 ability is a ETB effect, which means Drover already has the +3/+3.