When Oath of Nissa enters the battlefield, look at the top three cards of your library. you may reveal a creature, land or planeswalker card from among them and put it into your hand. Put the rest on the bottom of your library in any order.

You may spend mana as though it were mana of any colour to cast planeswalker spells. 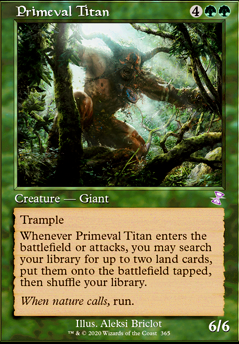 Aighty. I'm not sold on the 4 copies of Triome. I recommend at most one here, as you can easily make a 3 color deck work without it -- they're just really good as fetch targets in Modern, and the way to go to get 4 colors working in Pioneer.

What with Fabled and Attune searching up basics, I bet you could get enough snow support to use Frost Bite to maximum effect. In fact, your mana costs are good enough that you can almost definitely get Bite online on turn 4-5, and it's still a good version of Shock in the early game.

Your curve is weird, you should probably spend turn one on Attune or Oath of Nissa , or possibly Frost Bite, and spend turn two on either Voltaic, Longtusk or interacting with Lightning or Giant. Cut the Servant of the Conduit s, they're just . . . meh.

With Bonecrusher as a curve filler, Hydra as a bomb and Refiner as a mid level value creature, you have a fine top end.

(Recommended: -2 Whirlers, -4 Servant, -2 Arlin, +4 Oath +4 Frost Bite. This gives you more turn one plays, a better matchup against the aggro running around, and more consistency -- you don't need to have nearly as many 2 drop creatures)

I'd cut some triomes and possibly some other duals for snow basics, and turn the basics you already have into snow basics.

Your sideboard is weird, it doesn't fit your curve at all. If you make my above recommendations, I'd use the following for a sideboard:

Of course, those are more general suggestions, there's a lot of merit to those cards, I just don't think they work in this sort of deck.

I'd personally use a Skybind/Wishclaw Constellation Control list. White and black for the engine and core of the deck, but Green gives you Oath of Nissa, which is pretty powerful.

There's certainly a shell for that kind of deck, but you need to understand more about the game. Just watching a stream every day can get you tons of experience, and even just one or two a week can help a ton.