Choose target creature. Whenever that creature is dealt damage this turn, it deals that much damage to each other creature and each player. 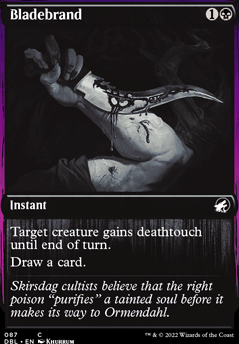 Kynaios and Tiro forget to give you a safeword.
by Jbubbarb

I'm playtesting a redirect damage jank deck and I came across this instance where I had Lightmine Field in play, and Palisade Giant equipped with a Darksteel Plate. If the giant attacked, taking the 1 damage, and I cast Arcbond on it, then would everyone at the table die other than me?

Thassa's Oracle + forbidden tutor is annoying to casual play because there's no common answer to it except for counterspells. I know Torpor Orb-like effects can stop it, and the incidental "shuffle back your graveyard with the trigger on the stack", but those are not effects you're playing in your deck if you're not built to take advantage of them. If your casual deck has to account for that and play enough answers, for both that combo, and for people who try to win with their boardstate of creatures, it takes up such an amount of deck slots that you have no room for your casual gameplan. That will leave you to run efficient combos as well, just to fit a wincon in your deck, and at that point, you're aspiring cEDH and leaving casual behind.

It's a mindset of wanting to win over wanting to play. When I play infinite combos in casual decks, they need 4-5 pieces to go off, all susceptible to different kinds of removal, very interruptible, and worth the effort when they come to fruition. I haven't seen people getting mad about my Arcbond/Pariah/Blazing Sunsteel/indestructible creature combo, only gotten compliments because it's a fun way to win the game and I did the work and earn the win. I have been yelled at, though, for including Thassa's Oracle/Demonic Consultation in a 5c deck that already had a singleton mana base just in case the game goes long.

I think the line is defined by opportunity to interact, and effort spent to win.

^Arcbond and Angrath's Marauders are both perfect! Impact Resonance seems like it could be a game-ender, too!

I realize the synergy between Toralf and deathtouch, as if he has deathtouch then all he needs for lethal damage is 1 which means the rest is all excess damage, but if I was going to add it in, I think I'd add Basilisk Collar before Gorgon's Head and Gorgon Flail. I'll add them to the maybeboard for anyone else interested, though.

I have more but I was sticking to boros

Arcbond can be a fun card for damaging your own creatures and everything else. It can be used with lifelink creatures or another modifier that gives the spell lifelink. You can also create infinite damage if you have creatures such as Spitemare while making them indestructible. Cool deck, good luck!

Arcbond + Zada, Hedron Grinder + any damage +(if you want to win not tie) lifelink