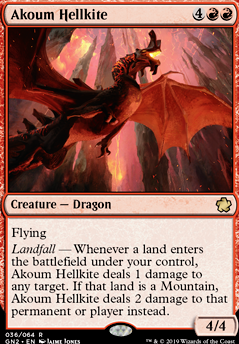 Omnath, Locus of Landfall
by Wiizy

Honestly, if you feel like it, Omnath, Locus of the Roil does better overall as a commander. Gruul decks have a problem of emptying their hand really quickly, but with the card advantage gifted by Roil, you'll have a lot better chance. That being said...

I was gold fishing with this deck and alot of the time I would end up with the worldgorger dragon combo but nothing to spend the mana on. Have you considered adding Retreat to Hagra or Akoum Hellkite to the deck. That way every time worldgorger flickers in and out all your opponents take 1 damage for each land?

What mistake was corrected?

Hellkite Igniter and Hoarding Dragon are what stood out as weak dragons. Moonveil Dragon , Scourge of the Throne or Thunderbreak Regent fit a utility role currently missing from your Zirilan package.

Akoum Hellkite and/or Valakut, the Molten Pinnacle seem appropriate for a mono red deck with 24 mountains.

Is Molten Disaster not a better upgrade to Earthquake? Split second is a powerful ability.

Hmm Akoum Hellkite probably would be a better switch, but either way you're right that Doubling Season is expensive, even with the reprint. Maybe it'll make you too much of a target even if you don't do anything with it right away, but maybe the risk is worth the reward? Akoum Hellkite may be able to stay in if you use it as removal rather than direct damage; it may be useful in that respect.