Cliffhaven Vampire occurrence in decks from the last year

"We Got A Bleeder!" Cliffhaven Anemia
by VesuvanDoppelbanger 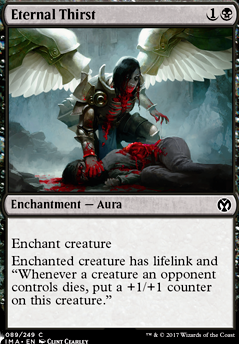 "My Life for Aiur" a Pauper EDH Story
by xsnappsx

Ravin' on Cliffhaven
by MrXilas

If hurting myself kills you its worth it.
by bloodborn

How much life do I have? I stopped counting.
by SatisfactionDay 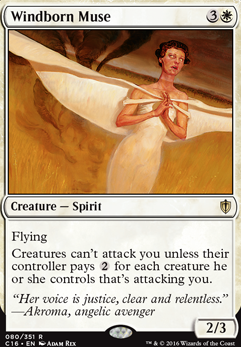 I want to make a Sen Triplets deck that plays with life gain and drain, for example using the triplets ability of allowing you to play spells from opponents hands to cast their creatures and having a Soul Warden to gain life and a Cliffhaven Vampire and/or a Epicure of Blood out to drain them. Then when you have enough life, blow the opponents up with Aetherflux Reservoir. Or if that dont work go for the infinite life loop with Sanguine Bond and Exquisite Blood. What cards should I get to best make that kinda strat possible to pull off?

Glad you like it. I feel the deck might need another sacrifice outlet as well, especially since none of your current ones are free, either requiring tapping or paying mana. Woe Strider and Yahenni, Undying Partisan seem pretty good for this, and if you think your mana base can support it Ayara, First of Locthwain might be nice as well. Perhaps put one of these in to replace Cliffhaven Vampire, the card doesnât seem to fit as well. This is just what I see with the deck though, and may not be what youâre looking for at all. Hope you find this helpful again.

I like this theme! Pawn of Ulamog would fit well. In case you would like to replace some of the more expensive cards like Kokusho, the Evening Star, cards with effects like Cliffhaven Vampire would be great in this deck as well. Check my Athreos, God of Passage deck please :)

I like the theme of the deck :) There is a significant overlap with my Athreos, God of Passage deck. Feel free to check it! However, I think this deck may be quite slow. With your token subtheme and the need for a lot of mana, Pawn of Ulamog may be a good addition. I would e.g. drop Debt to the Deathless because you cannot use it in early phases of the game and you probably have enough lifegain anyway. You could add something like Cliffhaven Vampire to potentially convert your ligegain into damage.

Good to see you here, and thanks for the comment. You work is awesome! I actually have your $5 Kor Equipment built at home and it is so much fun!

Well, for the deck... I completely overlooked Feast of Blood! It's a perfect card for the deck. In fact, as it is going for the win by turn 5-6, if you have a good draw, it really needs some interaction for dealing with the opponent's threats. And as this friend's thing is definitely the flavor, I suppose he'll love it!

About Cliffhaven Vampire... Don't you think its mana requirement isn't a little too heavy for a cad without haste or an ETB effect? It will certainly be tested, but it seems to me it is in the slow side of the spectrum. He could be here as a sub for Vampire Sovereign, but think the deck would resent the lack of her attached Sovereign's Bite.