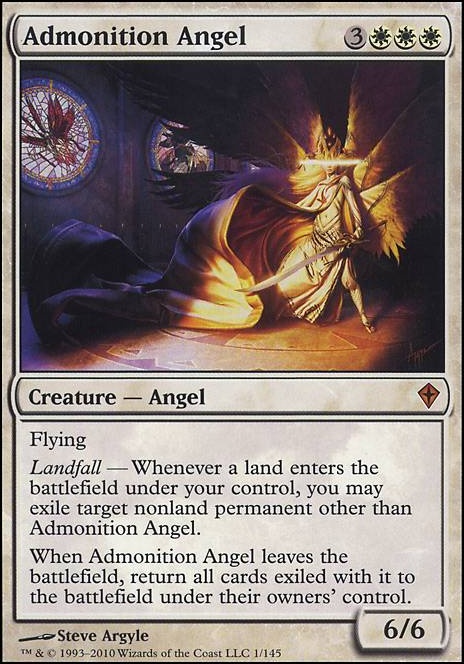 Landfall â Whenever a land enters the battlefield under your control, you may exile target nonland permanent other than Admonition Angel.

Admonition Angel occurrence in decks from the last year I play in a semi-competitive playgroup, far from cEDH but definitely on the upper end of "casual" powerlevel. I run a Chulane value engine deck that would probably draw hate in lower power groups, but he's pretty par for our group, and the deck does pretty well imo. I run a lot of ETB, additional creature cast/etb draw effects like Soul of the Harvest and Beast Whisperer , landfall effects like Admonition Angel , Roil Elemental , Tatyova, Benthic Druid , and have a secondary wincon via Approach of the Second Sun .

Imo Chulane and Roon run different builds though, even as value engines. I think both can be used to great effect, they just have different ways of going about it.

Ghost Quarter and Settle the Wreckage with that Aven Mindcensor.

Dust Bowl every land becomes Wasteland. Might be useful with Balancing Act.

Admonition Angel all the landfall.

Grasp of Fate over Oblivion Ring.

DerektheRed My main concern with getting rid of Wood Elves or Wall of Omens is I'm worried my early stage ramp is a little weak so I'm loathed to get rid of my 2 and 3 cost draw and Mana fixing options. Do you have an opinion on a more expensive card to ditch?

Tho if I ditch another higher cost card Reclamation Sage might be a good idea.

And if I get rid of any more enchantments for sorceries Mesa Enchantress could probably go.

Thanks ThoAlmighty, for the + and suggestions, I'll add them into my test version. I especially like Unsubstantiate and Expel from Orazca , Clique is being considered, and I'm currently trying out Admonition Angel (similar to Sanctions). Dire Hour I have considered, however doesn't fit into the blink part of the deck. I'll also take a look at yours as well, hope you found some ideas for yourself here.

Speaking of the test version, I shall have some to report from that soon. Stay tuned.

Yes I've been playing this deck every chance I get! Basically every up-date I've done on this deck has been because after play testing it and realizing what I need to change or just new cards I have acquired. So right now I currently own all these cards expect some of the special lands. I just order them on tcgplayer. Mistveil Plains and Emeria, The Sky Ruin is a must for me, however I'm wondering if having to many special lands is going to be a bad thing.

heyzeus_ I see your point on Lumbering Battlement where it would just be better for me to drop an angel rather using it only for board wipe protections, so instead I replaced it with Steelshaper's Gift . I also swapped Angelheart Vial for Coercive Portal because it grants me two things which is the chance to draw or a board wipe which is what i'm after. None of my friends take extra turns so it makes sense to actually not have Ugin's Nexus in this deck because there are defiantly stronger cards that i have.

Honestly I'm having a hard time trying to figure out what else to add besides expensive cards such as Land Tax , Admonition Angel , Avacyn, Angel of Hope , Archangel of Thune , Stoneforge Mystic , Linvala, Keeper of Silence , Angel of Jubilation , The Immortal Sun , Baneslayer Angel , Crucible of Worlds , and maybe Angel of Grace . But in my eyes these are the big buys that 10 dollars or up which probably wont get in tell summer.