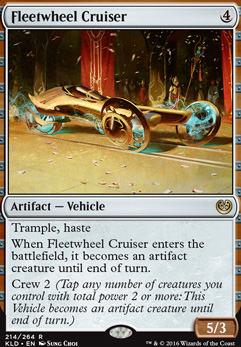 I goldfished a bunch of games and the deck was really explosive. I definitely think it's viable. I wasn't impressed by two cards though.

1.) Walking Ballista - it isn't often able to get big unless you're already way ahead or have flooded. I don't think it'll be the difference in many games. Toolcraft Exemplar will net you much more damage per game, on average.

2.) Glacial Fortress - I played a bunch of games where it entered tapped. That just isn't good for an aggro deck, even with this many 1 drops. I much prefer Mana Confluence as the damage won't matter so much when they're dead turn 3/4. It also gives you red for Shrapnel Blast and Bomat Courier.

I made a very similar deck to this but instead of banking on tempered I used small creatures like Toolcraft Exemplar or Ardent Recruit to become big threats on turn two. (Frankly thatâs almost better than a goyf.) I can forward the list if need be.

hellhole3927 A lot to reply to, so forgive me if I miss anything. As I said in the earlier post, Atarka's Command would be worked into the sideboard, not mainboard. This would most likely be in place of the two Skullcrack 's. Don't think it is wholly necessary mainboard, especially as Signal Pest essentially acts as Bushwhackers 9-12 anyway.

Legion Loyalist is a card that has eluded me since this deck's conception. I'm aware how powerful he is and have always wanted him in this list in some fashion, but I have no idea where the room is. Possibly in the sideboard to help with things like Lingering Souls . That said, Kytheon, Hero of Akros

Flip and Toolcraft Exemplar are quite key to the deck. The synergy between Kytheon and Bomat Courier (ie. Courier allowing Kytheon to flip on turn 2 easily and then Gideon protecting Courier to allow for a load of card draw later if needed) is something I'm quite fond of and is very powerful in practise. As for Toolcraft Exemplar , he just hits like a truck.

When I speak about BTE being able to cast only Reckless Bushwhacker and Destructive Revelry , I'm aware that artifacts could be cast with them as well, however my point was that realistically, these are going to be cast beforehand. In my opinion, BTE is something that you cast when you intend to go off that turn, after emptying your hand of all other things you want to cast on the turns earlier.

I'd have to say no to adding more Kuldotha Rebirth 's as well. Having ran 3 of them in the past, this proved to be too much. Drawing two is often unnecessary. By extension, I have to disagree about Goblin Piledriver as well. Goblin's isn't really the theme here; artifacts is more so.

I do however, really like your point about Gut Shot . Realistically makes a lot of sense. I'll definitely consider it.

Adding Atarka's Command would be totally worth it in my opinion, it would act like a third bushwhacker. What I think would be best for your deck is to cut Kytheon, Hero of Akros