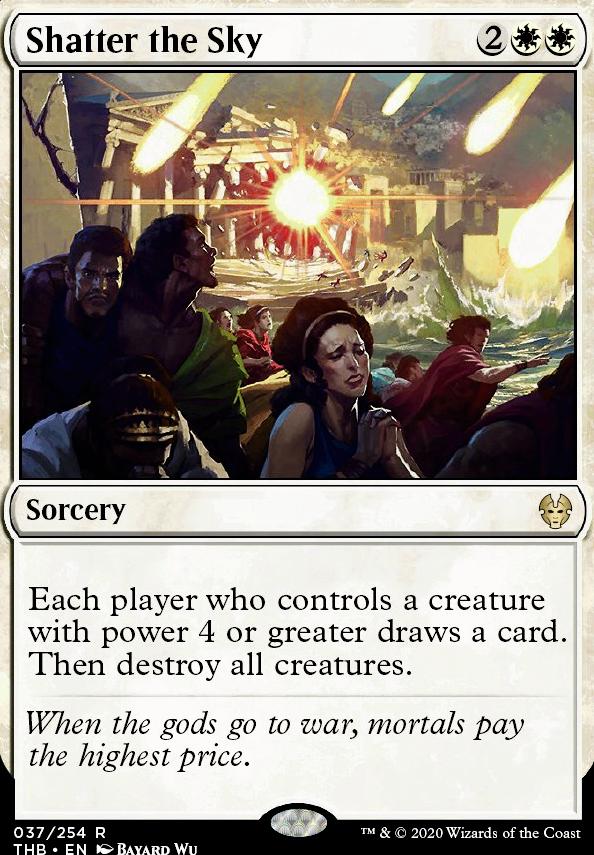 Each player who controls a creature with power 4 or greater draws a card. Then destroy all creatures. 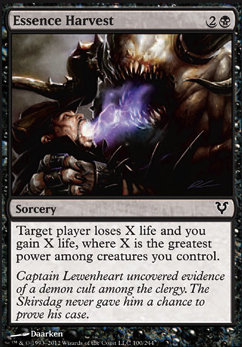 Oh man, Shatter the Sky is so salty. I love it. No Time Wipe though? Also, excellent deck name.

Shatter the Sky also seems like a better deal in mine as well since 2 black for Kaya's Wrath is abit of a pain to pull off early enough for it to count against aggro decks.

Played with this a bit more last night - won against an Izzet aggro deck that played heavily on the thievery theme (Robber of the Rich, Brazen Borrower, Mirrormade), but it was much more of a trudge.

A couple of observations worth considering:

Flicker of Fate seems a bit of an underperformer. It gives a cute "gotcha" surprise, but I can't think of a time that I wouldn't prefer to build my board presence with new enchantments. I found that I didn't actually want to reset my sagas - I wanted them in the graveyard ASAP for that Dance of the Manse! I'm considering cutting them for an additional Omen of the Sea and The Birth of Meletis.

Narset, Parter of Veils isn't the all-purpose champion here that she is in Azorius Control. Her draw-denial is critical in some matchups, and useless in others, and her dig ability can actually be quite frustrating - I've found that often what I'm really looking for is either a creature (Dream Trawler usually) or the last land that would let me drop my Trawler or big, murderous Manse. To dig and then see these cards banished to the bottom of the deck incites much gnashing of teeth. I'm considering putting two Narsets to the sideboard and putting two Archon of Sun's Grace mainboard. After much mulling of Archon vs. Trawler, I'm thinking por que no los dos? Let's ramp up the aggression - this deck is enjoyable because of its blend of control and hard hits. Narset can switch back in for the various draw-factory decks.

A nod to the control aspects - the "stymie your opponent's early game" package of Alseid of Life's Bounty, The Birth of Meletis, Teferi, Time Raveler, Banishing Light, Shatter the Sky, and Elspeth Conquers Death are really doing the intended work. AND they ensure you have a couple of enchantments in the graveyard at the perfect time.

I'm interested to see how this plays with a couple more clutch creatures - should add value to Elspeth's step III as well as up the aggression. And with the enchantments bumped up to 17(!), Setessan, Archon, and of course, Dance should all be happy.

I'll have you know I had this glorious experience with my version of this deck last night (against a Gruul Aggro deck):

Turn 3: Sac Omen of the Sea for some more digging, Alseid dies as I take a bit of a hit from a Pelt Collector, a Paradise Druid, and a Gruul Spellbreaker

Turn 4: Shatter the Sky, clearing the board

Turn 5: Setessan Champion, The Birth of Meletis, I take a hit from a newly landed Questing Beast, opting not to block

Turn 6: A second Setessan Champion, Banishing Light on Questing Beast (Setessans are now 3/5 and 2/4 and have gained me three extra cards in the last two rounds)

Turn 7: Dream Trawler, The Birth of Meletis finishes up and dies, I attack with the Setessans as my opponent has only put out something small (I forget what). They go down to 16, as they took 2 burn from a dual land earlier.

Turn 8: Dance of the Manse X=6, bringing back Alseid, Omen, and Birth as 4/4s. I draw 6 cards off the Setessans, and they become 6/8 and 5/7 respectively. I draw off of the returned Omen. This takes our dear Trawler up to 11/5, she attacks at 12/5 as I draw another card, along with the Setessans. Game over.

This deck's strategy could not have played out more smoothly - very satisfying!

Got in a few matches last night. No Temur Clover. I dominated White Devotion twice.

I lost to an Orzhov Ajani's Pridemate and Bloodthirsty Aerialist deck because I accepted a bad draw instead of mulliganing, thinking that Shatter the Sky was going to save me. Still a battle but I fell behind and couldn't catch up.

Shatter the Sky could be good if you're still needing a wrath but wanting a bit of easement from the mana restrictions of Kaya's Wrath.

Sold on Thryx, the Sudden Storm over Destiny Spinner. I swapped those in the sideboard. I also buy Shatter the Sky over Time Wipe. I reduced my sideboard's Dovin's Veto count to add the fourth Shatter.

I think Shatter makes more sense tempo-wise with Dream Trawler as the big closer - you can wipe on turn 4 or 5, and then drop Trawler.

Regarding Mono-Red: I think that the deck is actually positioned fairly well to deal with it (acknowledging that the "Red Deck Wins" archetype is a perennial, loathable pain-in-the-ass that often, indeed, "Wins"). Spot removal through Banishing Light, early blockers through Meletis, Alseid (sacrifice block, setting up for Dance), and Champion, and a little lifegain to weather until the sweep. Side in the extra Shatter, Archons and Heliods for extra lifegain and board presence. Side out Elspeths, and some combo of Narsets and Teferis (2 and 1?). Watch the tide radically turn on turn 5. That's my theory - we'll see how it survives the real world.

I hadn't thought about draw/discard for setting up dance.

I removed Destiny Spinner because I think Titus is right: it's the big spells getting countered most of the time, not the enchantments. With control back on top, it might be time to give her another try. I do still like Thryx, the Sudden Storm though. He's a threat, he makes Dance and Elspeth Conquers Death cheaper, and he comes out at instant-speed so we can catch control decks off-guard when they use end-step abilities.

The main thing I see is that there's nothing in your sideboard for dealing with mono-red aggro, which is still very much a tier-one deck and something to be aware of. That's the main reason I have Shatter the Sky over Time Wipe. Against aggro, they aren't getting a card anyway. Against slower decks, we have a decent chance of having Narset, Parter of Veils on the battlefield anyway. The cheaper cost on Shatter the Sky also helps with turns where we want to cast two spells.