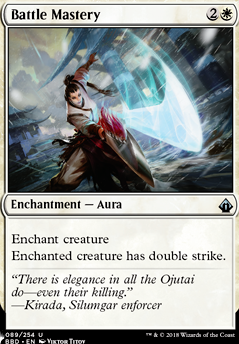 Enchanted creature has double strike. (It deals both first-strike and regular combat damage.)

MajordomoTom - yep, I'm into that rudeness. I think I'll take out Battle Mastery to make room for this. Good suggestion, thanks!

Sultai_Sir on Does Double Strike Stack?

I suited up Uril with a Runes of the Deus and Battle Mastery. I didn't know what to do, so I came here to ask. Does double strike on a creature with double strike give it quadruple strike? Would I deal double strike damage twice? Thanks!

Your Commander is also good for beating CMD DMG so use them. Also more Enchantments/Auras, more Carddraw = Awesome.