Eidolon of Countless Battles occurrence in decks from the last year 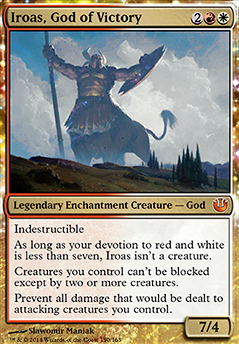 Hey Multimedia, you are right, i need to improve my lands. I dont know much about cheap lands on a bugdet, just have many gates laying aroung (which are just make your game slow, if you dont hit them early). I will add your considered lands. I am not sure about the bounce lands. What is your experience with them? I often feel like its slowing me down or is not advancing my board state. (But I am also not a very good player, so... :D)

Idyllic Tutor and Congregation at Dawn are nice inclusions. The deck feels a bit slow, so every tutor might help. Thank you for your help!

Hey king-saproling (what an awesome name btw!) I have to be honest, i actually dont care about the commander. It's just a requirement for the colours I am playing. I will playtest with them. I never used partner commanders, so I just ignored them all together. Eidolon of Countless Battles might be a good addition, since I am looking for more early game drops. I dont think this deck can hold up with late range or combo-decks. Although Keeper of Fables might be worth it, given the lack of card draw this deck has. Being out of gas is the worst feeling. Storm the Citadel could be a good finisher with Overrun.

Thank you both for your recommendations. I will gladly use some of them! :)

Eidolon of Countless Battles might be interesting considering you run fewer creatures than Auras. You might want more targets for your Auras or more synergy. Also, I think Inferno Fist might be interesting as it could be more removal and has synergy with Aphemia, the Cacophony.