10: Monstrosity 10. (If this creature isn't monstrous, put ten +1/+1 counters on it and it becomes monstrous.)

As long as Colossus of Akros is monstrous, it has trample and can attack as though it didn't have defender. 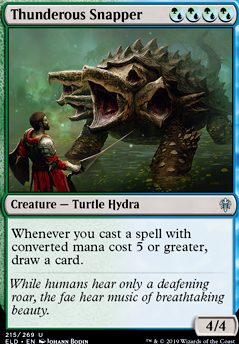 Attack of the Walls
by chri1852

Colossus of Akros is pretty terrible in this deck. An 8 mana 10/10 with indestructible isn't very impressive when you have stuff like Assault Formation and Arcades making your Steel Walls into 1 drop 4/4s.

Although it's a little more expensive, Perimeter Captain is really nice. Tower Defense is another classic defender deck card. I would also make some space to put back the Wall of Omens, maybe by taking out some Steel Walls or Wall of Denials.

I lost to Backlash in a Queen Marchesa deck once when I excitedly activated the monstrous ability on Colossus of Akros. Great underrated card.

Going to see how the deck runs with some of the big mean guys I added but if the deck has a hard time I'll be looking at taking out Lorthos, the Tidemaker and Colossus of Akros for 2 mana dorks, something that brings lands out, or a mana dork and possibly Elemental Bond.

How do you think your deck will be winning? Commander damage? Fairy Tribal? Tokens? artifacts/enchantments matter? that changes what the best cards are. For example, if your deck cares about tokens, Favorable Winds is much better than All That Glitters . But if you're trying to win with commander damage from Alela, All That Glitters will deal much more damage. Either are probably better for the deck than Colossus of Akros , I personally don't think that's the most useful.

Some other cards I'd recommend looking at, just because they're cheap and work well with the deck, are Etchings of the Chosen , Etherium Sculptor , Starfield Mystic , Faerie Swarm , Hour of Reckoning , and Trading Post