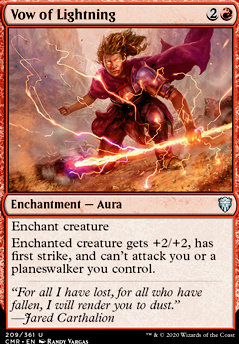 Enchanted creature gets +2/+2, has first strike, and can't attack you or a planeswalker you control. 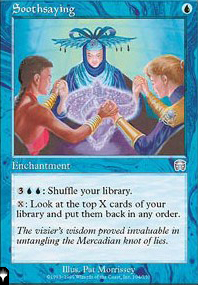 Mixing in a little Bloodthirsty Blade, Grenzo, Havoc Raiser, Vow of Malice, Vow of Lightning along with your Disrupt Decorum would be icing on the cake.

shadow63 I didn't say otherwise... You still control/own the aura, so treasure is still coming your way. There will still be a temptation for a different 2-for-1 dynamic (from an opponent's perspective - remove a creature with 2 other player's mana sunk into it). 2 opponents still may gun for whatever creature has the aura, or boardwipes happen, but at least this way you get potentially: some treasure return, eventually someone using removal on an opponent's creature, & forced damage being thrown at someone else. Better upside than Vow of Lightning, for example, which usually falls flat with no return. Maybe less durability than Bloodthirsty Blade, but more possibility of some return as well. Feels like R&D has been doing a good job learning that even politics cards should have the possibility of payoff attached & suddenly they become more playable.