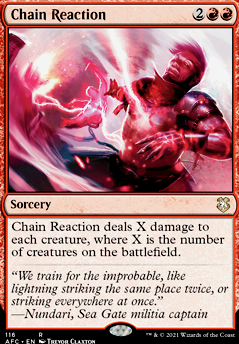 This deals X damage to each creature, where X is the number of creatures on the battlefield.

Chain Reaction and Blasphemous Act seem counter productive to a werewolf deck. Usually the more werewolves that are out, the more they complement each other. This may hurt you more than others. Also by the time you can play Blasphemous Act, you will either have a bunch of creatures and likely will be dominating, or a ton of mana to where you should be able to play anything and likely have a bunch of creatures as well.

Chaos Warp is also very risky. There are better things to replace it with to get rid of creatures. Beast Within is also too generous. You may be getting rid of a hard hitter, but why not just remove it and leave the player with nothing? It certainly would not benefit you to remove your own werewolf creature for a 3/3 beast. Werewolves are typically going to be pretty powerful. So use cards that force opponent creatures to fight yours to get rid of creatures.

Moonmist is a great card even with the daybound mechanic. It may not transform your newer werewolves, but making only werewolf damage count, it like a super Fog.

Who Let the Dogs Out?

Hey rafe028! There's nothing wrong with the card and considering this type of deck and it's intended power level, you could absolutely try it out if you'd like. I will say that it's creature quality isn't quite as high as several cards in the list. It's ability is conditional on a good board state (see my comments on board wipes in the update) and it only targets players (the deck doesn't usually have much issue creating a lot of damage or finishing off opponents). The one hiccup with the card is the activated cost. This deck; quite consistently, uses all or pretty much all it's mana every turn (on your turn or others assuming flash). For example Hound Tamer Â Flip has an ability that I've yet to use. The trample that Tamer provides is great (and it's meant for redundancy since this deck wants/needs trample to get damage through consistently but more importantly to draw more cards) and it's ability is at least an available outlet if it's ever needed. Still though I haven't had to/needed to use it yet (threat of activation with blocks; especially with politicking and pointing that out, has often been enough). Keeping the 'activated ability' thought train going, I've used Duskwatch Recruiter Â Flip a handful of times but again; referring to the board wipe comment, it's often been a come from behind/ dig for answers situation usually (or as I said in the update, when you're drawing lots of support but no gas). It's flip side for the cost reduction has often been it's better use. Being able to cast several creatures after drawing so many cards (similar effect with Cemetery Prowler) has been great (I'm not saying overextend but when you have 13 cards in hand it's better to use some than just discard). The last 'activation thought' is that the ones I've mentioned already in the deck are mana sinks and don't tap (or something like Howlpack Piper Â Flip which uptaps) whereas Runebound Wolf is once a turn cycle due to the . You might sneak in fairly late game finisher on one player's end step, upkeep get the 2nd player with your ping and then attack the 3rd to pull out a win but that's probably magic xmas land in a lot of cases (life totals have to be perfect in relation to board state etc). More than likely though this will take a few turns to do (activate for 6, activate again for 6 etc) and your opponents will see this coming (whereas you play several buffing threats and attack for 30 on one turn in the same scenario).

Basically I'm saying when Runebound Wolf is good, you're already ahead and likely don't need it to close out the game/ finish off a player (like you've spiraled out of control with Hollowhenge Overlord and have 20 wolves in play. Then Runebound Wolf feels win more). When you're behind, it's ability isn't doing anything because you don't have the boadstate or you need all the mana to rebuild. And with the deck playing multiple spells a turn (from all the draw), you don't have left over mana to activate with any consistency to make it useful/a threat. It feels like it's ideal place/play is a very late game situation where it's cast and you methodically burn everyone out due to low life totals. Or you're in a game that has some sort of board stall (like someone is a pillow fort with stuff like Sphere of Safety or maybe a player has flooded the board with tokens and you can't get through or something similar). In those edge cases I'm more inclined to say 'you got me' and shuffle up.

As an aside, I will refer to the update and mention that Ill-Tempered Loner Â Flip (more importantly and specifically Howlpack Avenger Â Flip) and one of the board wipes I'm using (Blasphemous Act or Chain Reaction) with a decent board state will have the same desired effect of burning out the table. 9 wolves including Howlpack Avenger Â Flip and Blasphemous Act will kill a table (okay fine it'll do 117dmg so maybe someone is at 3 because everyone was still at 40 lol.)

Now by all means, I don't want to be discouraging and suggest you give it a go. I'd love to hear some game play feedback on how it works for you. If you're knocking people out on the regular with it, let me know and I'll give it another look.

Very nice deck; +1! I was thinking that Chain Reaction would be fun in here (in my playgroup people are fond of token decks, so this would be brutal against them).

This is a cool deck concept. I'd suggest adding some tutoring effects (depending on your budget) to get the card you need in your hand. You may also want to consider Blasphemous Act or Chain Reaction to abuse your Ogre Slumlord and Brash Taunter. While this won't trigger your general it will give you a great deal of tokens off your slumlord and throw a huge chunk of damage at an opponent. I'd drop Eater of Days. Sure you force the other players at the table to attack each other you deprive yourself of expanding your field. Turns, in my opinion, are the most important resource a player has.

If you're looking for some mean flavor, then my second favorite card of all time Blood Moon is fantastic!

Also, I always recommend at least 1-2 boardwipes in ANY deck, some of my favorites in R/G: