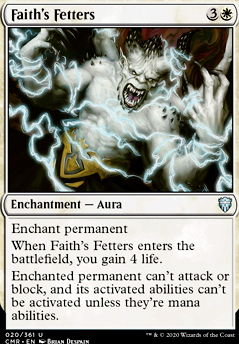 When Faith's Fetters enters the battlefield, you gain 4 life.

Enchanted permanent can't attack or block, and its activated ability can't be activated unless they're mana abilities. 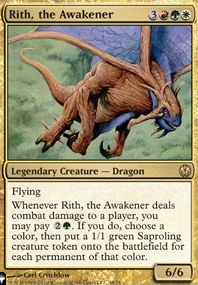 Nice deck (+1), have you considered Light of Promise or Huatli, the Sun's Heart ? It can be particularly brutal with Angel of Destiny . Faith's Fetters is also a pretty good option for control since it can lock down quite a bit including planewalkers, equipment, and even utility lands, plus it also gains you some life in return. Hope this helps.

Love the deck idea I think that running some Faith's Fetters would be a good idea its a great counter to most bombs or even planeswalkers and with only 4 removal in the form of Murderous Rider I feel its lack in that area. Maybe you wouldnt feel the need to keep the Grimdancer for their death touch in that case??

I agree with the suggestions above, to add to that; Daxos, Blessed by the Sun can serve as an additional copy of Impassioned Orator. Murderous Rider is a pretty good alternative to Murder since it comes with a lifelink creature and can be reused later. Faith's Fetters might be something to consider for the sideboard. It can't be recurred with Lurrus, but it can give you another way to lock down permanents other than creatures, such as planeswalkers and even gods before they become creatures. Hope this helps.