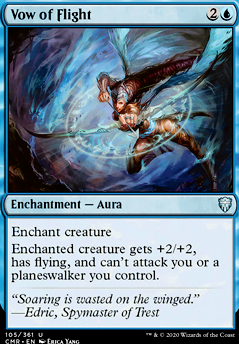 Enchanted creature gets +2/+2, has flying, and can't attack you or a planeswalker you control.

RaidenShogun69 on Can I keep Karona False â¦

You could use the âvowâ cycle of enchantments like Vow of Flight . To ensure they canât attack you with karona.

Polaris on Can I keep Karona False â¦

If you're looking to hold onto Karona, your best bet is probably Homeward Path , which will let you take her back once per turn cycle (though your opponent will control her long enough for instant speed shenanigans). However, there's no way to permanently supersede her swap ability short of just removing it with Kenrith's Transformation or similar, which kind of defeats the purpose of playing Karona in the first place.

If you're looking to mitigate her drawback, consider cards like Vow of Flight to prevent her from attacking you and Clout of the Dominus to make her untargetable, which will at least make it harder for players to use her against you or otherwise mess with her.

Decrees of the False God

Spirit of Resistance , Blessing of the Nephilim

Vow of Flight is the only vow really worth playing (because it gives evasion). Instead you might be better served with a couple good blockers. Stuffy Doll is freaking amazing as you tell everybody to attack you with Karona to knock out the scary guy. Any cheap, weird blocker that can't kill Karona and won't die from damage. You can use those against other attackers as well.

If you play anything that "taps all creatures" you give your opponents a chance to murder the last player in rotation by attacking 3 times with Karona for 8 Commander damage each time (you know Karona has Avatar as a type right? Its an errata thing. You can declare that for the +3/+3 bonus).

All 5 "Bringer" creatures are fun. Bringer of the Black Dawn wins games. So does the Blue one. And the Red.

Neat combo with infinite tokens. If you have a clear path of attack you could also use Breath of Fury .

My karona deck is super casual but might be fun to look at. Muh muh muh MY KARONA. Yeah I know, everybody uses that title AND I'm an old ass man so I don't know how to link the deck.

Will definitely look to add in Spirit of Resistance wasn't aware of it until now. Same with Vow of Flight and I'll take out the green vow to throw it in.

Ward of Bones would be great for this deck, since it won't be artifact heavy and my meta tends to be the opposite, hence why I threw in Energy Flux to anger them.

Of the Karona buffs, I'll probably throw in the Civic Saber since I can play it before Karona hits the field.