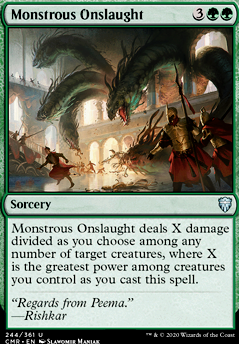 Monstrous Onslaught deals X damage divided as you choose among any number of target creatures, where X is the greatest power among creatures you control as you cast this spell. 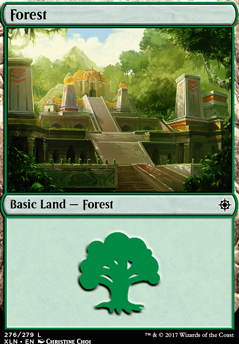 GreenGuy47 I just brought the deck back from retirement! I had converted it into a Selvala cEDH , but i hardly played it, and Omntah was my general and the deck has always been fun. I definitely like Monstrous Onslaught because creature board wipes in green are so hard to come by! Three Visits, yeah, I don't really feel like dropping 100+ on something I can't even get foil lol. I run so many dorks to get Omnath out turn 2 so I keep the ramp spells limited, but idk, that might change depending on how play testing goes this time around. I was considering Helix Pinnacle as a wincon I could flash in with Emergence Zone or Vedalken Orrery, or just have it out early game because people don't want to waste a removal spell on it in the early goings. I've had Nissa, Who Shakes the World on my radar since bringing the deck back....i like mana doublers :D I will definitely be testing out different stuff as I get this deck back up to snuff, thanks for the all suggestions and reminders of good green stuff ^__^

Hey, idk if this deck is still active but I thought I would recommend a few cards. First of all Monstrous Onslaught is a must for all Omnath decks as it will most of the time wipe just about all of your opponents creatures for only 5 mana. Elephant Grass can be good. Elvish Herder is a great trample giver. Three Visits is better than rampant growth if you have the money. Nissa, Who Shakes the World is basically vernal bloom 2.0. I think Doubling Cube needs back in and Helix Pinnacle wouldn't hurt either. Lifecrafter's Bestiary is great card draw. Sword of Feast and Famine untaps your lands and gives you protection from a cast down or walk the plank. Crop Rotation is great with rogues passage and the cradle. Plow Under absolutely kills someone usually. Calming Verse is a one sided enchantment wipe, and Sylvan Tutor is wordly tutors weak cousin.

I would like to recommend Monstrous Onslaught it wrecks everybody else's board if you have a big Omnath and then you have a few turns to take cheap shots at them. check out my deck for more cards!

I think that you should run the Grafted Exoskeleton anyway. The hisses from the people at your LGS is just a sign of fear and weakness. Destroy them. ;P

Honestly though, if you were to run it you would be running infect in one of the most fair ways possible. You aren't even running Triumph of the Hordes. Since you are swinging with large creatures anyway, giving them infect isn't that much different from giving them double-strike. Infect gets an undue amount of hate because even though it isn't an overly strong strategy in EDH people just don't like being the first person knocked out of the game early because of infect damage.

That aside, I think that if you were looking to tinker with your deck more it would be worth looking at including copies of Llanowar Tribe, Overgrowth, Return of the Wildspeaker, Steel Hellkite, and Monstrous Onslaught. Each of them costs less than $1(USD).

Looking at your deck, it is basically just looking to play removal and ramp spells until it gets to at least 6 mana, then drop its commander or some other large creature. Although the deck does want to have as many lands out as possible for Multani, the quicker you can hit that 6 mana mark the faster your deck can start putting down what it needs to start pressuring the board. I've found that Llanowar Tribe is really effective at doing that in mono-green. Being able to go from three mana on turn 3 to hopefully seven mana on turn 4 would really help give your deck some wings. Overgrowth is another option for helping you hit that 6 mana mark quickly. Sol Ring and Thran Dynamo would also be worthwhile considerations. I know your deck prefers ramp spells that pull lands from your deck, but you have to weigh that against more efficient ramp that lets your deck play the game it wants to more quickly.

Return of the Wildspeaker is a straight up improvement to Soul's Majesty. It's an instant and it doesn't target a specific creature, so it doesn't get fizzled if an opponent kills your largest creature out from under you when you cast it. You also don't have any humans in your deck, so the second option for the spell will pump every creature you have out.

It looks like you want all that ramping the deck does to have more meaning that to just cast and pump Multani, so I suspect that's why you have such large creatures at the top end of your mana curve. Something to consider though is that instead of just going big, have outlets that let you sink extra mana into helping you generate additional value. Steel Hellkite not only gives you a large, evasive attacker but you can also pay extra mana into it for additional attack power or to blow up an opponent's permanents. At 6 CMC it is also likely that you won't have it stuck in your hand for anywhere near as long as something like Impervious Greatwurm would be. Those large creature make being so ramp-centric feel more fun but they are also going to be dead cards in your hand for a good portion of the game, especially if they are in your opening hand.

Monstrous Onslaught is one of the few mass creature removal spells that green has access to, and it works great with a commander that is just going to keep getting bigger as the game goes on. A lot of opponents won't expect a mono-green deck to be able to clear out 3+ potential blockers before attacking, so it might let you kill an opponent that thought they were safe after leaving back a few creatures to defend with.

Anyway, if you do end up making some changes to the deck I hope my suggestions help give you some ideas. Best of luck in your games!