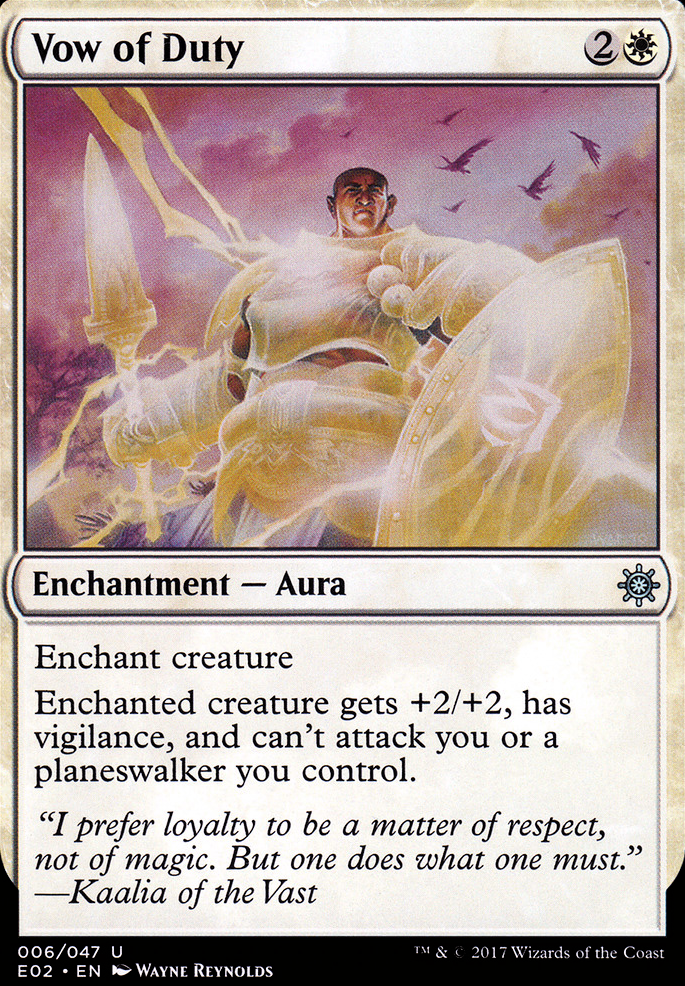 Enchanted creature gets +2/+2, has vigilance, and can't attack you or a planeswalker you control.

Vow of Duty occurrence in decks from the last year

SilentClockwork on vow of duty

Vow of Duty If I enchant an opponent's creature, can it not attack me or is it that it can't attack my opponent?

In the Hands of the Fates [PRIMER]

Hmm when I think of politics I usually just think of insurance that those politics don't backfire, Vow of Duty and Vow of Malice buff opponent's creatures, but keep them from attacking you, Mystic Barrier essentially keeps 2 opponents from attacking you while also doing the same for each of them, you can then use politics to save one opponent from another's large board for favors

Now I do admit I don't know why you have Paradox Engine, the value of your tap effects are not too strong and the engine is too well known that you could probably cast an Armageddon instead and draw about the same heat.

One last suggestion would be to think about Angelic Renewal, it's an awfully neat save a guy enchantment that works really well with Sun Titan and it was just reprinted making it extra easy to find, might even find it foil. (I did say last suggestion, but ran into Helm of Possession when reviewing the comment, what better political way to kill a creature than to simply steal it at instant speed)

Have a Karona, now kill my enemies!

Here's some suggestions based on my own experience with Voltron Karona:

If you are curious, here is my Voltron Karona deck. It might provide some other ideas: