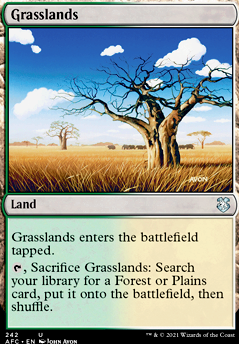 , Sacrifice this: Search your library for a Forest or Plains card, put it onto the battlefield, then shuffle your library.

The Commander's Norin the Command Zone
by GaZZuM

Hope this helps! Good luck on your deck and have a wonderful day! Feel free to check out some of my decks.

@ average_overload_enjoyer I love Grasslands but aint got no sexy

I wouldn't be sad for slow fetches coming into modern... by no means do they replace the Zendikar fetches but something like Grasslands would just be nice for budget players/people trying to get into modern.