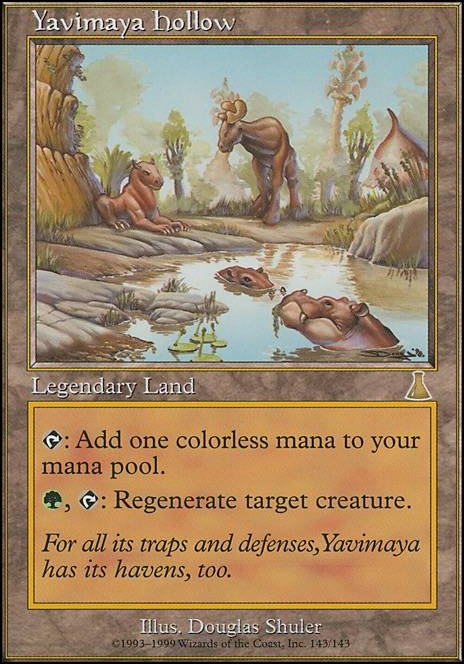 8 yrs late to the dance and I ain't too skilled neither- Imperial Recruiter seems helpful, no? Veil of Summer ? If you see this and feel like helping me out, why use those bounce lands? How aboot Yavimaya Hollow ? Great deck, love land destruction.

@Sandilini yep, the inclusion of card draw like Beast Whisperer and Guardian Project really encourages you to go all in on creature ramp. Those little synergies add up! Wild Growth and Utopia Sprawl are obviously great, but I've definitely noticed an improvement after swapping them out for dorks. As for Yavimaya Hollow , I just seldom found myself being able to activate Winding Canyons . Hollow's ability is cheaper and more often relevant. The corner case with Wrath of God / Day of Judgment has seldom come up. The truth of the matter is that I have a textless foil promo Wrath of God, and I just enjoy looking at the art :)

Citanial Flute seems slow, why not get a Worldly Tutor , Green Sun's Zenith or Finale of Devastation in it's place?

Rishkar's Expertise - Draw + Tempo. It's a bit risky at sorcerry speed, but the benefits far outweigh the risks. Even if it only gets your commander. Do note that it does not target :)

Thank you for the comments & upvotes. However some didn't take the time to look at what was already in the decklist itself, and didn't get the "low to the ground" memo (suggesting huge 6-8 CMC spells).

abby315 I like your suggestions. All but Vorniclex; the CMC is too high. The Astrolabe on the other hand costs 1, filters colorless mana when needed, and can be drawn by Scrying Sheets . That, and Rhonas kind of needs to be "set-up" too, but I forgot about it granting Trample, so I'll keep that one in mind..

I'll eventually be dropping the non-basic forests (I was considering picking up a Yavimaya Hollow for one).