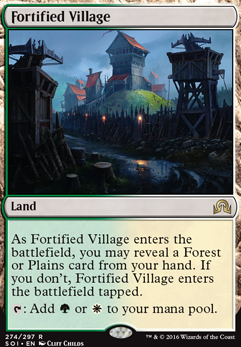 Fortified Village occurrence in decks from the last year

Thanks for posting this deck! I was trying to make angels work with devotion and Nykthos, Shrine to Nyx , but only having 4 copies of the card needed to make the deck work was really hurting me I think, plus sometimes the early drops don't provide enough devotion to really ramp me anyway. So, inspired by you, I'm branching out to include Green in Angels Ramp.

For your deck, I think playing red is greedy, particularly now that OUaT is banned. You play 14 white sources and an important WW card in Bishop of Wings - that does not seem feasible.

Regarding your deck, I would suggest playing Game Trail and Fortified Village Â over Rootbound Crag and Sunpetal Grove as they come down untapped on turn 1 more often which is important for that early ramp.

I get what you're saying about using Paradise Druid to attack over Sylvan Caryatid , but tbh I feel that it's more important to have the blocker against early aggro starts instead. Once we get to the late game, we want to throw down beefy angels, not mess around with 2/1's on the ground.

Regarding boardwipes outside of red, I really like the idea of Single Combat as our big angels are often a lot better than pretty much anything on the opposing side, particularly if we use it to clear out all the blockers and can hit a big planeswalker they may have left. I haven't had occasion to test it much in practice, though.

Oh yeah, you might want to consider some fetch cards if your budget permits, with things like Crop Rotation and Enlightened Tutor coming to mind. 2 Crop Rotations will greatly increase the odds of you getting out your Sanctum, and thus you could possibly replace some of your ramp lands with dual lands, such as the very budget Stirring Wildwood , or Sungrass Prairie or the less budget but still affordable Fortified Village . If you like the Wildwood, you might also like Treetop Village , which is a very affordable beat stick that resists some forms of removal.

Birds and Smothering are very good choices for expensive price upgrades. Helm is fine too because you added Aurelia and Godo to give you a combo win. Omnath at $7 is kind of out of place because not playing many ways to take advantage of sacing Elementals. Rampaging does the same thing as Omnath for less than $1 and it has trample. Armada Wurm and/or End-Raze Forerunners each less than a $1 could replace Omnath and have more impact. Hornet Queen at $2 creates some nasty tokens.

Interesting choice for the other expensive price cards: Iroas, Panharmonicon and Splinter. There's nothing wrong with these cards, but I don't think they're upgrades that a budget version of the precon needs. The $20 from these three cards could be better used for land upgrades. $20 can get you the three Check lands, one Shock land as well as some other lands and these will help your deck much more.

If you like some of these suggestions I offer more advice about these potential additions and the cards I'm suggesting to cut. Good luck with your deck.