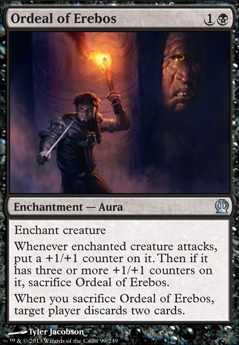 Whenever enchanted creature attacks, put a +1/+1 counter on it. Then if it has three or more +1/+1 counters on it, sacrifice Ordeal of Erebos.

Nice day for a Black Wedding
by Zombrained 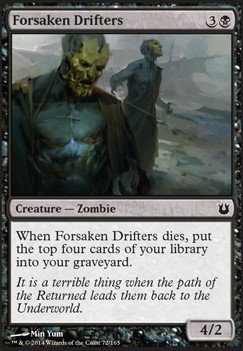 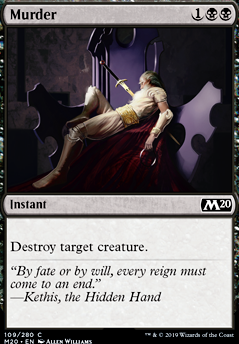 Reyhan: Started from the Bottom
by DeusOfScars

I like Bump in the Night over Ordeal of Erebos. Even though it is slightly out of flavor as Innistrad rotated with the release of Theros. Bump in the Night might smooth out the curve and give you more to do early on besides dumping a turn 1 Rakdos Guildgate lol.

So, I have a few ideas we could hash out for this deck, and I included a bunch of cards that I'll just give you, as well as a few cards you should pick up and plan to use, regardless. We can sit down and actually hash this out together if you'd like, or you can wing it and develop something on your own. Either way, I'm stoked you're getting so into this!

Cards You Should Pick Up

Cards I Can Give You

I tinkered with this a bit- I play in more comptetitive meta, and there is some pretty interesting stuff that could be done to make this work, but most would leave it barely recognisable. A 1/2/3 cost Elves of Deep Shadow/Tukatongue Thallid/Blood Funnel/Nighthowler/Strength from the Fallen/Blisterpod/Renowned Weaver/Rancor type thing might work, as might a more focused Ethereal Armor/heroic setup or Ordeal of Erebos/Oblivion Crown/Ravenous Rats/Delirium Skeins beatdown/discard setup.Bad Moon/Helm of the Gods enchantment black might be playable.Spike Jester/Mardu Scout/Hellspark Elemental can make a fun budget rakdos core and deal a surprising amount of damage.The main thing to remember is to test to see if it behaves the way you think it should when facing other decks so that it continues to perform well.

in terms of land Terramorphic Expanse/Evolving Wilds is a fix for three colour thats pretty cheap, or keep the splashes lategame then run Unknown Shores/Aether Hub/Crumbling Vestige/Shimmering Grotto as appropriate to provide for some more versatile lategame. Mono black is super playable (probs my favourite thing at the moment, and I made this Mono black deckbuilder's toolbox to help people find cards for their decks. GLHF!

All non-blue cards from original Innistrad - Kaladesh expansions that depict torches. I excluded some cards like Unruly Mob and Village Bell-Ringer in which the torch is not really noticeable at first glance. Also Fireshrieker because I remembered it off-hand.