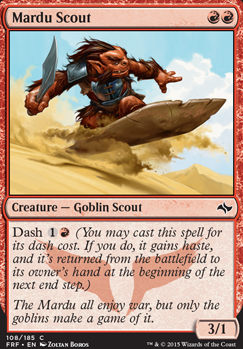 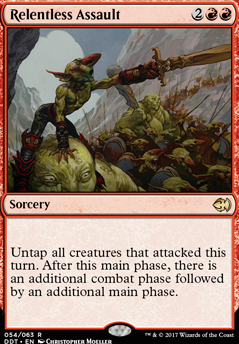 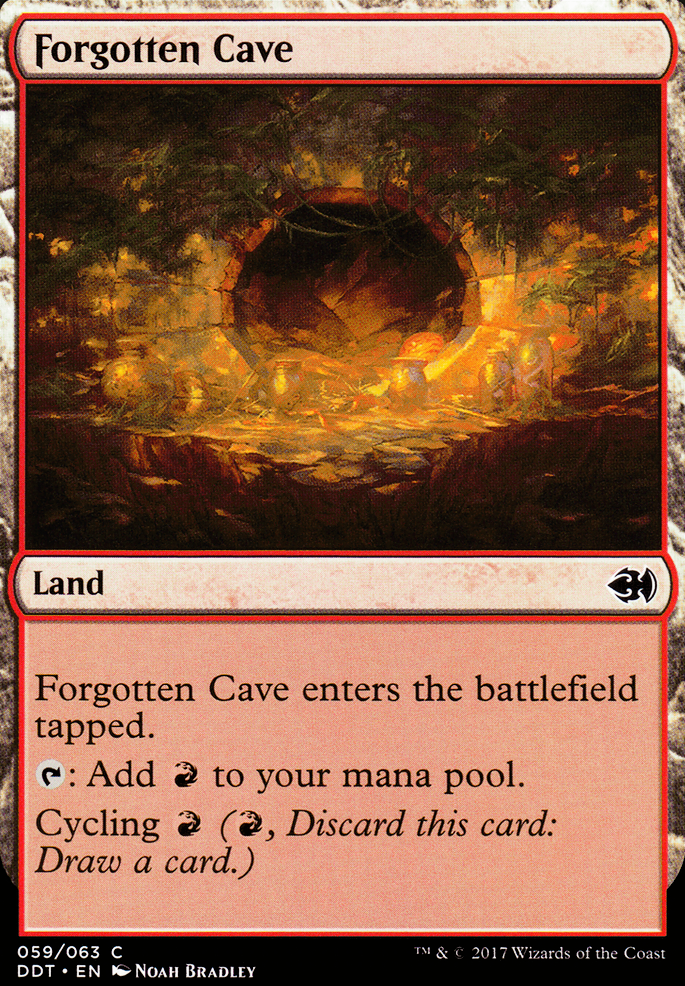 I don't really like Pyric Salamander here, it just uses up so much mana... if you agree that it isn't working well for you, maybe Mardu Scout instead? Keldon Halberdier is also a creature that's kinda like Ball Lightning, but probably a bit too slow.

Innocent Blood could be a nice alternative to Diabolic Edict , but it's sorcery speed.

I'm a big fan of Temur Battle Rage , it could give your Arc Runner the trample it needs to not just get chump blocked.

Loving the idea and theme of your deck so far. Just let me suggest one thing. Id personally replace Zurgo Bellstriker with Mardu Shadowspear or Mardu Scout . The reason I would do this is because you're mainly using that card for the dash ability. Otherwise you could use a vanilla 2/2 w/haste. With Mardu Scout you get a 3/1 for more damage and the card is safer in your hand until your next combat after the Dash resolves. But with Mardu Shadowspear you get a 2/2 and when he attacks your opponent loses 1 life automatically. It doesn't matter if they block or kill the creature. They still lose 1 life regardless just for declaring him as an attacker.

i had to make a new account under the name of the very creature i was recommended bc apparently i dont know how to link a card and apparently you can't delete comments, pretty unepic. Anyways I'd HAVE to recommend Garrison Sergeant, as well as the other strongest boros card Razia, Boros Archangel other EXCELLENT inclusions are: Razor Boomerang some classics should make a return in this deck, Highspire Mantis Firemane Angel Mardu Scout and Depala, Pilot Exemplar is an ESSENTIAL

You're raising some excellent points. Grinning Ignus actually used to be in here but like you said, Mardu Scout gives me some more synergy options with the other Gobbo-related stuff that's in here. I've not included Pia and Kiran Nalaar for similar reasons.

I do not particularly like damaging myself if it's not really necessary, hence Leyline of Punishment was chosen instead of Sulfuric Vortex.

I will find some room for Chaos Warp and Mana Vault though; both would definitely come in handy. The spell subtheme has been working really well for me. I really like that this deck has multiple angles that can take you to a win, and both the Goggles and Mastery have been instrumental in this multiple times.

Oh yeah! I used to run a Purphoros deck - eventually switched it to a Grenzo, Havoc Raiser deck after a while, but I still remember Purph fondly.

The biggest thing I think you're missing is Grinning Ignus: It costs a quarter, and essentially reads : Trigger Purphoros. I think Mardu Scout may be a close enough swap, although obviously you lose out on Mana Echoes shenanigans.

Personally, I like Sulfuric Vortex over Leyline of Punishment, but I guess that's subjective. Also, kudos for Price of Progress, Price of Glory, and Ruination - mono-red needs all the help it can get, great choices!

A couple other suggestions:

I feel like this deck is trying to be mid-rangey, which is totally fine, but Foundry Street Denizen doesn't exactly fit into mid-range goblins. The same could almost be said for Goblin Piledriver.

Frenzied Goblin, and Intimidator Initiate would increase the chance that your Goblins will survive an attack.

Mardu Scout gives you a repeated creature EOTB trigger. Can be quite valuable with a Soul Warden in play.

I'd highly suggest adding Impact Tremors, to give you more EOTB utility with your mass of tokens. Purphoros, God of the Forge is another option for that affect.

Also, this is not a deck where it's possible to run 12 lands. You'll want to run 18 at a minimum if you're playing a 4 cost spell. Every hand won't have Skirk Prospector, and Skirk Prospector is only good if you've got enough mana to play your token generators.

Deck looks real fun, but it needs to decide between aggro and mid-range. You definitely need to up the land count, as Skirk Prospector doesn't cut it as a land replacement.

Others : Nest Robber, Mogg War Marshal, Mardu Scout, Aether Chaser, Kari Zev, Skyship Raider, Aether Swooper Im sure I will think of more but this is all for the moment!

I've playtested your deck a few times to see how it would perform. Biggest problem is that it contains so much expensive to cast stuff, the chance to get some traction in a game's early phase is slim.

In order to improve on that, I'd really add some more land (5-6) to your deck, some more ramp options like Burnished Hart and/or Fire Diamond as well as some cheap options to utilize Purphoros' damaging ability early like Mardu Scout, Young Pyromancer, Dragon Fodder, Krenko's Command and Hordeling Outburst.

In order to make room for all of this, I'd advise you to remove a lot of cards that take a butt-load of mana to cost and aren't that valuable to your strategy anyway like all of the Dragons, Darksteel Colossus, Hazoret the Fervent and Kozilek, Butcher of Truth.

Here's the link to my Purphy deck; hope it helps!