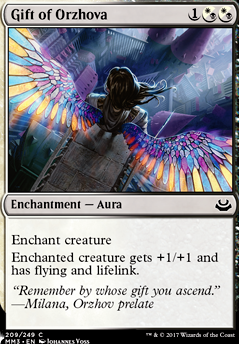 Enchanted creature gets +1/+1 and has flying and lifelink.

Alela - Fae and Auras
by Salad_Thunder

Agrothorn, I am very glad that you like this deck, as it is one of my favorites.

I could remove either Gift of Orzhova or Vampire Nighthawk, but not both, since I wish to keep both flying and lifelink abundant in this deck, and, also, the fact that the nighthawk has deathtouch is very appealing, as well.

Tidehollow Sculler could possibly replace Castigate in this deck, because, for the same mana cost, it provides a creature in addition to the exiling ability; the play can get back the card, but that seems to be a minor drawback, in my mind. Perhaps, I should ask the forum for advice on that matter?

This deck is made for Edge of the Divinity. I just did a playtest and had a 7/7 Mourning Thrull swining on turn 3 lol. I think you can consdier dropping Gift of Orzhova. Most of your creatures have flying or lifelink so it becomes redundant.

I think your deck may need some card draw. Phyrexian Arena should fit given you have so many ways to gain life. I'm mixed with Vizkopa Guildmage. Second ability is cool, but not sure how much damange it will translate to. Gets silly if you can activate it twice. What are your thoughts on Tidehollow Sculler?

Although I am a big fan of Vampire Nighthawk, I feel you will have more synergies with your other cards if you dropped it for a creature with both BW in mana cost.

Athreos, God of Passage is great, but a little expensive.

Maybe you can try to fit one of Abhorrent Overlord. Can be a crazy combo with Deathbringer Liege on the board!

TypicalTimmy on What's the Most Epic Art?

But, for deeply personal reasons, Gift of Orzhova is my #1 favorite piece of artwork.

Ivanian I do agree that Sram, Senior Edificer may not be the way to go. Probably would rather have more Sixth Sense or just more Adanto Vanguard . Also the lifelink is huge so I'm thinking Gift of Orzhova is the way to go.

-I'm not totally sold on Gift of Orzhova . It's just a slightly worse version of Unflinching Courage and gums up your curve by being so high cmc. I would just go the full 4 Unflinching courage and replace the remaining two Gifts with some lower cmc auras (maybe Gryff's Boon if you're worried about having flying? And to provide early evasion).

- Hero of Iroas seems really strong for racing non-interactive linear/combo decks and reducing your somewhat high aura curve, but obviously isn't great for other more interactive matchups since it doesn't have hexproof.

Gift of Orzhova is not legal in your deck because of the hybrid white mana, I would reccomend Eternal Thirst as a replacement.