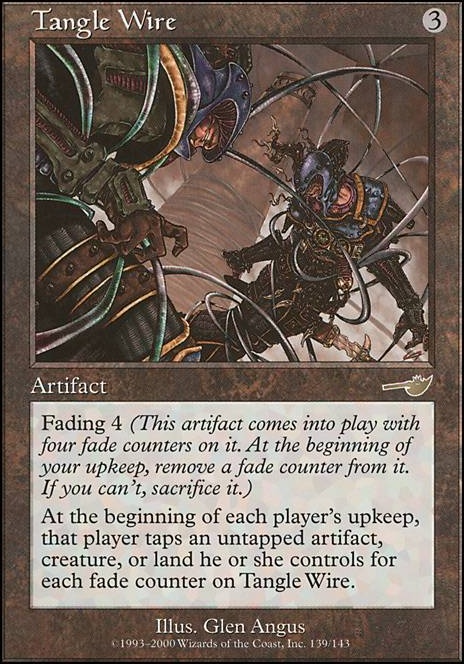 Fading 4 (This artifact enters the battlefield with four fade counters on it. At the beginning of your upkeep, remove a fade counter from it. If you can't, sacrifice it.)

At the beginning of each player's upkeep, that player taps an untapped artifact, creature, or land he or she controls for each fade counter on Tangle Wire.

Let me start by thanking you for your very well thought out comment and your great suggestions! I'm sure you have success with stax effects in your deck, but that isn't the direction I would like to go in. I still want players to attack and interact with each other, I just don't want them doing that to me. Slowing them down slightly with spot removal if they start making any moves that are too dangerous is about as far as I would like to go. There's also several new players in my playgroup and Winter Orb, Static Orb, and Tangle Wire is not the warmest welcome to MTG lol. I do very much like the mana dorks and Brago, King Eternal and will try to make room for them in my deck!

I have not read the previous comments, so bear with me here...

Now, I see that you have Sphere of Safety and Static Orb in your maybe board, and I would strongly suggest both of them. They are both mainstays for stax. I'd add to that Smokestack and Tangle Wire for the same reason.

As for the possibility of combos, I have no input, because I personally refuse to use them. In my experience with my meta, decks that incorporate combos compromise the theme of the deck for the purpose of facilitating the combos (adding tutors and draw to increase the likelihood of the combos, and/or extra spells that protect the components of the combos, leaving less room for cards that work with the overall thematic structure of the deck).

Hope this helps at all. Cheers!

Youâre âmorally opposed to [stax] piecesâ ? Derevi is a stax general. Youâre also running Brago â- the stax general â- and a numbers of hatebears. Hatebears and stax are peas in a pod, especially with your general. Winter Orb is arguably the best card in any Derevi build. Sure, it doesnât win you the game, but it stops everyone else from winning and buys you time to assemble your combo, which is exactly what you said youâre looking to do in your write-up. Since youâre not running a lot of tutors, you should run not just Winter Orb but also Static Orb and possibly Tangle Wire to increase the odds of drawing one of these soul-crushers. If you combine them with a taxer, such as Thorn of Amethyst or another taxer, now youâre playing stax. I have a very light Derevi stax deck on tappedout, heavy on hatebears. Check it out if youâre interested to see how to weave in sparse stax pieces to your own Derevi build. It will help you buy time to assemble your otherwise slowish and fragile lantern control combo. It will make your build far more resilient. I look forward to see what you do next.