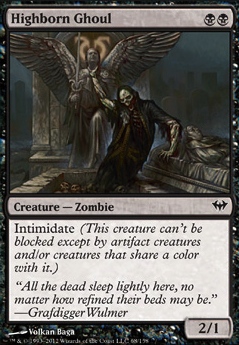 Highborn Ghoul and Graveyard Marshal would likely be good contributions so that you have more devotion to black. I'd recommend doing a 3 or 4 of Gray Merchant of Asphodel as you only have 2 right now, and it is an extremely impactful 5 drop. Personally, am not a fan of Tattered Mummy but those are just my thoughts.

Sorry to butt in, but for a low-to-the-ground aggro zombies deck I would keep Diregraf Ghoul in. 1 mana for a 2/2 is a good rate, you want low cost creatures to flood the board with, and it gets pumped by the zombie lords so it's still fine later in the game. Here are some specific suggestions for upgrades once you get a budget for them:

Some other cards you could look at are Diregraf Colossus , Undead Warchief , and Dark Salvation (it's probably worth playing Salvation in place of Murder ). Also, as a general tip, tribal creature decks don't play many non-creatures--around 6 at the most. Cutting some of those spells in favor of more lords would increase the efficiency and power of your deck.

You have fallen into two traps which ensnare a lot of new players; first, rather than running 4x of a smaller pool of cards, you are running 1x of most, second, you have over 60 cards in your deck. Both of these factors effect the consistency of your deck, in a normal 60 card deck, running mostly 4x cards, there is around a 40% chance that you get a given card in your opening hand.

This is a more subtle issue, your mana-curve is weighted to 2 and 3 mana cards, normally you want this to be 1 and 2 mana cards. This gives you more options on turn 1 and turn 2 and then moving forward. Some 1 mana zombie related cards include Graf Harvest , Diregraf Ghoul , Ghoulcaller's Chant and more pricy options Gravecrawler / Cryptbreaker . All of these cards have value in a zombie deck, but you wouldn't necessarily put them all in the same deck.

Lastly is the issue of card selection. In some ways this relates to the previous point, but not entirely. Firstly, you have marked this deck as Modern, this is an established format, which has rules around the cards it can include, these cards; Dark Suspicions, Fog of Gnats, Nefashu are not Modern legal. Secondly, you have a number of vanilla creatures, these are creatures which don't have any keywords, creatures like Gutter Skulk will rarely appear in a constructed deck, since there are numerous (two examples Highborn Ghoul / Graveyard Marshal ) better options at the same mana cost.

I hope this is of help, Wizards of the Coast have many articles around deck construction, so it might be worthwhile for you to have a read, since they can go into more detail than I can on this forum.

Two things right off the bat:

As far as upgrades go, some great cards that I didn't see on your list are: Cryptbreaker, Graveborn Muse, Lord of the Accursed, Plague Belcher, and Shepherd of Rot. These cards have more relevant abilities and are Zombie tribal staples.

Something else to consider is running the mono-black mana package since you are able. While not really a budget option, all mono-black decks can substantially benefit from its inclusion.