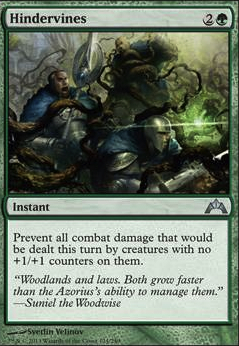 Prevent all combat damage that would be dealt this turn by creatures with no +1/+1 counters on them.

Reyhan: Started from the Bottom
by DeusOfScars 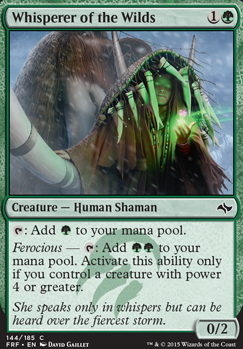 Hydras are gonna need trample so that they aren't chump blocked. Nylea, God of the Hunt and Brawn are good for that. I also have a Savageborn Hydra and Apocalypse Hydra for you. Hydra Omnivore Is probably a must. We should look into things that interact well with counters. Doubling Season Is the high end of this. Rosheen Meanderer Or Xenagos, God of Revels would probably be a better commander so you can have access to red. That will give you access to things like Mina and Denn, Wildborn and Clan Defiance as well as Neheb, the Eternal and Decimate and Signal the Clans. Hindervines and Archetype of Endurance can help protect your creatures. The only other thing I would really change is to give yourself ways to deal with fliers! I have a lot of those cards. Looks good man! I'm excited for it to be done.

I'm not sure what's to be gained from playing nothing but oozes, apart from cards like Cavern of Souls, Descendants' Path, and Door of Destinies that benefit every tribal deck.

Bloodhall Ooze, Experiment One, Scavenging Ooze, and Predator Ooze are all reasonable cards for Modern. Necrotic Ooze is more of something you want to build around as its own deck, not necessarily toss into anything. Acidic Slime is also a good card, but the rest of your deck seems to be more aggro, making 5 CMC a bit high.

So of course, where does that leave you now that sylvannos has shown up and shit all over your idea?

For one, notice how much of a +1/+1 counter theme you have going on between Bloodhall Ooze, Experiment One, Scavenging Ooze, and Predator Ooze. Hardened Scales is absolutely bananas! That right there functions as your Intangible Virtue or Honor of the Pure. All of your oozes will just start doubling in size. Winding Constrictor is similar: it's a low CMC card that dumps a bunch of counters on everything. Nissa, Voice of Zendikar offers even more +1/+1 counters.

Second, you're in Jund colors. Lightning Bolt, Abrupt Decay, Atarka's Command, Terminate, and Fatal Push are all good options here. You're basically a quick, low-cost aggro deck. That also means you can play Dark Confidant to further increase your draw power. Since you curve out at 3 (Predator Ooze and possibly Nissa, Voice of Zendikar), you'll only be taking 1 damage on average each turn. This also opens up the potential for Liliana of the Veil. You're constantly drawing and playing oozes, while forcing your opponent to discard cards.

Copperline Gorge is a good start, but you really don't want to have lands that always come into play tapped. Fetches and shocks are going to be your best options, along with the aforementioned Cavern of Souls. I'd also recommend Blooming Marsh, Blackcleave Cliffs, and Kessig Wolf Run.

Lastly, your sideboard. It should probably be some number of hand disruption spells (Duress, Thoughtseize, Inquisition of Kozilek), artifact and enchantment removal (Destructive Revelry, Ancient Grudge), and general Jund sideboard tech (Fulminator Mage, Kolaghan's Command, Kitchen Finks, Maelstrom Pulse, anything that didn't get put in the main). I'm not sure what other cards you'd add that protect your plan of killing people with oozes. Hindervines? Skullcrack? I dunno.

Lol I know the feel man. I'll try to list some more cards, counters were my favourite thing when I first started magic lol. Most of the cards I'm listing are fairly inexpensive too :)

I think grave shinanagins are a lot of fun too lol..