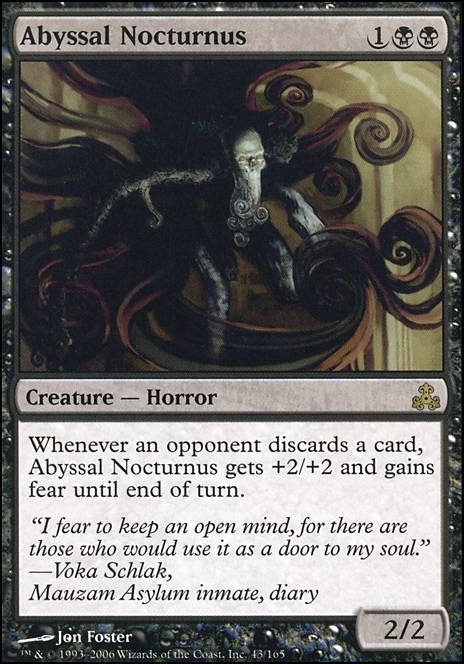 Whenever an opponent discards a card, Abyssal Nocturnus gets +2/+2 and gains fear until end of turn. (It can't be blocked except by artifact creatures and/or black creatures.)

Nicol Bolas, the Weirdo.
by CIiffordthebigreddog

Very interesting build. For a solid discard creature, consider a couple of Fell Specter, as they are a solid beater in the air and can quickly burn your opponents out. I might cut the Marsh Flats and shrine bc this is a Mono colored deck, and I can't see the cards being splashed worth it but that's just me. A good card to splash for is Angrath, the Flame-Chained. He's straight value in a discard deck and i can see you running 4 Bloodstained Mire . The haunt of Hightower is a really nice one as well. For some reason, Tappedout didnt let me link the card image so sorry about that

For budget rack, Delirium Skeins is great, as is card draw like Sign in Blood . Getting into topdeck mode then winning there offers you a lot. Also, Davriel is better than a lot of other options- run four, he's a clock and discard two. Its really good.

Remember your sideboard- planning those cards lets you figure out where you are packing all your graveyard hate/combo hate/tron hate etc, leading to a much more complete plan. A transformative sideboard that becomes Blood Scrivener / Asylum Visitor / Liliana's Reaver / Abyssal Nocturnus creature aggro also informs the state of the mainboard, for example.

On the note of lands, I've had success with Sea Gate Wreckage . The colourless requirement does require working around, but it can be good.

Finally, for the sake of fun, Waste Not . Its great.

Well Iâd say Abyssal Nocturnus and Etherium Abomination are the weakest links out of your horrors I think.

Also, Arcane Adaptation is super nifty if you end up taking some horrors out for non-horrors. I wouldnât take out to many but it gives you more flexibility with creature choices.

Evil and Bad. Oh boy. I'd consider Bloodghast over Abyssal Nocturnus, one turn earlier and has recursion seems worth it. I could be very wrong, as a 4/4 is no joke, but in such a creature light deck that despite the burn has more of a mid-game win-con than aggro I would be concerned about blocking.

Maybe for the sideboard ;)

Nyxathid, Abyssal Nocturnus, and Shrieking Affliction would be nice in discard heavy decks. If you want the deck to be more creature heavy Fell Specter and Raiders' Wake are nice as well. Hypnotic Specter is also a good choice.

Coughlincohen I decided to take out the zubera and put in two more Nyxathid and two Abyssal Nocturnus as I still tend to favor Nyxathid over Nocturnus. Thanks for the comments.

If anything, I would swap out Ashen-Skin Zubera for Abyssal Nocturnus. You have a lot of quick discard in your deck, Abyssal Nocturnus would be a beatdown card that is a lot quicker than the Zubera.