Whenever a player plays a spell, that player discards a card.

Oppression occurrence in decks from the last year

He who shall not be named.
by Adrbro3 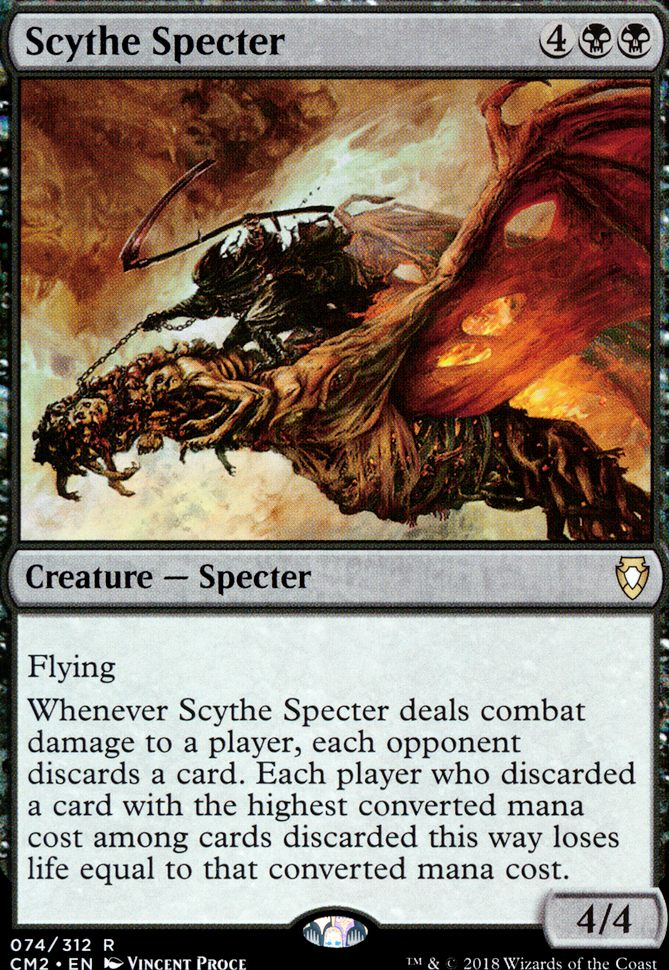 What's Yours Is Mine (OLD BORDER)
by sgcuttlefish

@ Coward_Token Thanks for the suggestion and checking out my deck. But I think Painful Quandary and Oppression would be better effects to do that if I was to take the deck in that direction.

Pain Magnification, Fervor, Rakish Heir, and In the Web of War are all decent red cards I run in mine, with Larceny and Oppression to add to the discard theme.

dingusdingo on Suggestions for Rakdos?

is a pretty bread and butter reanimator strategy. The bonus is you save slot efficiency by having a discard outlet in the command zone. I'd also peek at the handful of "everybody discard" effects like Oppression Bottomless Pit and Necrogen Mists because Chainer plays well from the GY. You can also accelerate faster than normal by running Reanimate or Animate Dead or other cards that let you play from the GY for cheaper than casting cost.

dingusdingo on Building without winning in mind

Apart from my competitive brewing, I like to build decks with a theme of warping the game somehow for casual play. It helps me to keep it fun and not focus on optimal play.

One of my very first decks was colloquially known as "Everything dies everybody loses life", with Horobi, Death's Wail as the commander. I slammed every nasty piece of toxic board state I could find like Spreading Plague and Oppression, especially things resulting in loss of life. It won a decent amount of games due to hating out creatures pretty well.

I also enjoy a good Kami of the Crescent Moon deck. Give the whole board tons of card draw, and then stuff the deck with cards like Control Magic or Steal Artifact and not a single counterspell. I believe it is currently 0 wins for 12 losses, but I still have fun in pods with it and my friends have spoken highly of the deck.

I've seen a handful of other decks that eschew winning for reaching certain goal board states. Some people love Maze's End decks, and they're usually the same ones trying to hit an absurd Door to Nothingness. Having objectives for your deck is usually wise, and winning can be fun, but doing it with flair or wackiness is what really makes it all worthwhile. Always include a way to win, but feel free to make it your third or fourth goal in the game.

Right? My play-group fell apart and I stopped playing. I plan on starting up at an LGS soon, even though I hate most people that play lol. I figured Iâd put an new coat of paint on before I get smeared.hows your deck favoring? Iâll check it out after this comment.

Thanks for the compliments though! Over time I realized Skullbriar isnât worth protecting when golgari is so good at just bringing shit back. I figure the best method is keeping peopleâs hands empty, graveyards full, and a board full of lock out creatures. Iâm writing up a new primer and adding more cards like Sheoldred soon.

A TON of cards are plummeting with the mystery boosters so Iâm considering cards I previously hadnât.

Hydras growth is the best card weâve received in ages for this deck. Iâm so excited for all the new EDH cards coming out this year. Maybe itâll allow a more counter focused deck.

The discard theme is new but I figure itâs a much stronger protection than just beefing up with enchantments and artifacts: Necrogen Mists, Oppression, Bottomless Pit, Cunning Lethemancer, Liliana, Heretical Healer Â Flip, and Stronghold Rats

Hey dude! Long time no see! I like a lot of the changes this deck has gone through since Iâve last commented. How has it been playing in your meta? Do folks run away scared?!? Youâre version is very different from mine and I like it so much.

Thanks for showing me Hydra's Growth. That is a dope counterS card. I definitely need to get one!

You may have had these in before but I want to say that I really like how you have Necrogen Mists and Oppression in here. Two really solid enchantments to hinder the opponents down.