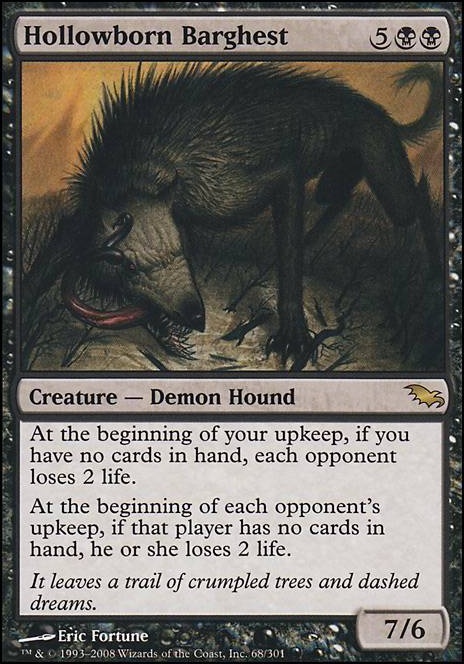 At the beginning of your upkeep, if you have no cards in hand, each opponent loses 2 life.

At the beginning of each opponent's upkeep, if that player has no cards in hand, he or she loses 2 life. 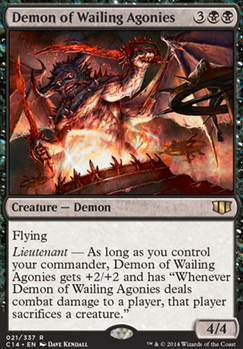 Miller of the Card Tower
by Sboomstick

Geth, Lord of Discard
by SlushyJones 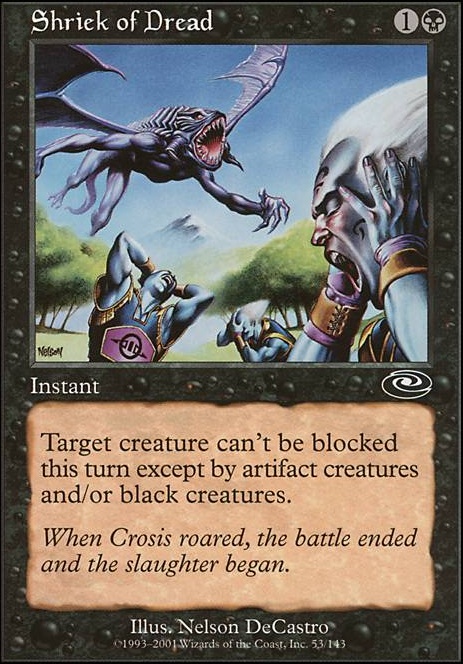 You, my friend, look like you could use a Hollowborn Barghest and a Monomania. And while you're at it, why not throw in a Bloodchief Ascension (btw, that goes infinite with Mindcrank if that's your thing). Be careful when you look for discarders; a lot of them aren't worth the card stock they're printed on. I have a theory-crafted Crosis deck you can use as a reference.

Thanks for the comment, Kandrel. I honestly hadn't realized that I had taken so many of the pure discard effects out, that cards like Shrieking Affliction had become pretty bad, so thanks for pointing that out! The goal of this deck isn't really to make everyone groan, so I'm not sure I want to punish the card draw too much, especially with symmetrical effects like Spiteful Visions, but I'll have to think about it. I'll be looking into replacing Lavaborn Muse, Shrieking Affliction, Quest for the Nihil Stone, and maybe Hollowborn Barghest as well. Thanks!

Decree of Pain > Crook of Condemnation

Curator of Mysteries > Muddle the Mixture

Interesting. A few pointers/suggestions; Your CMC (converted mana cost) is extremely high, hovering around 4.5. A good number to try and start at is around 3 to 3.5, and tweak it from there. Your deck also seems to have a bit of an identity crisis, where it is both big butts, life gain and sacrifice all at once. I would try and focus on two of those instead of all three. Since you said this is mostly for friends, i assume that it isn't super competitive, so here are a few suggestions for cuts and suggested replacements: Baleful Eidolon- its just a 1/1 deathtouch for 2 unless you pay a ton of mana. Replace with Sakura-Tribe Elder for ramp. Eater of Hope just a mediocre creature, replace with Silklash Spider so you can have a big butt and deal with fliers. Hollowborn Barghest is just a bad creature, really. replace with Blinding Angel or Defiant Bloodlord, which both do cool things. Necropolis Fiend just fights with your little bit of recursion. Id replace with Murder or Hero's Downfall so you have a kill spell. I would love to give more suggestions right now, but i don't have enough time right now. leave a comment on my wall or reply to me and I'll definitely get back to you. And welcome to Commander!