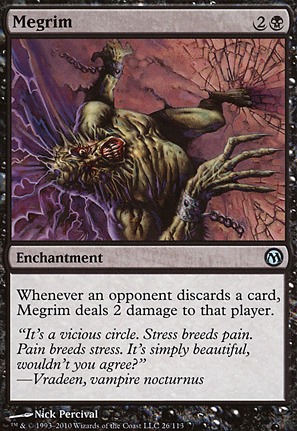 Whenever an opponent discards a card, Megrim deals 2 damage to that player.

Megrim occurrence in decks from the last year

Nath of the Gilt Leaf
by castoravio

They see me wheelin'
by Konto

berryjon You only dedicated a paragraph to Liliana's Caress and Megrim, but (despite being an artifact) was The Rack not worth mentioning here? Nor the fact that there is an entire modern and (if I'm not mistaken) legacy deck dedicated to this ability that black has? These decks take advantage of not only taking apart someone's hand, but punishing them further due to Shrieking Affliction and The Rack. Plus, we got a planeswalker that does all of this in one with Davriel, Rogue Shadowmage. Also, cards like Raven's Crime that can be allowed to cast multiple times but is still one mana. I'm curious as to your reasoning for leaving these out despite being huge impacts in competitive magic.

Have you considered Liliana's Caress as additional/cheaper copies of Megrim? Also Sphinx's Tutelage feels like it would fit here as an alternative win condition. Hope this helps.

enpc on Need help with a Ravos/Tymna ...

Straight up, Megrim does next to nothing here. Unless you're runnign lots of wheel effects, dicard trigger stuff generally isn't good.

What is your goal for hte deck? Are you wanting to play lots of graveyard recursion or are you going for life gain/loss?