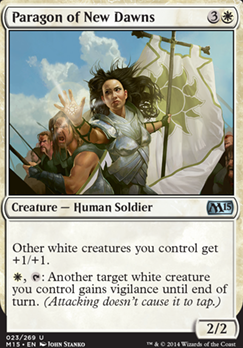 I think I will cut Guardian Seraph in favor of Exquisite Archangel. I like Angel of Glory's Rise because during one of my plat tests last night, I was able to bring back a bunch of humans such as Paragon of New Dawns and Grand Abolisher right before I played Avacyn, Angel of Hope

But ya, you should totally build Angel Tribal! I am thoroughly enjoying this deck so far.

I love soldiers! Cards you should run: Captain of the Watch is 4 of for sure. Fiendslayer is solid in straight midrange but is not a soldier, cut him. Field Marshal is a must. Both of the Veterans have got to be in there. Elspeth, Sun's Champion is great, run as 2-3 of. Definitely cut Paragon of New Dawns. Always Watching and Intangible Virtue is nice too. Kytheon is interesting but you almost never want him to flip. Interesting deck!