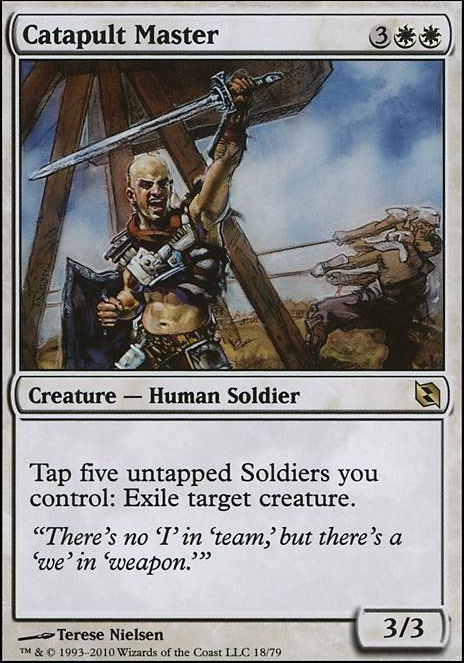 Darien, The Kink Meister
by anax110

Upon re-reading the question, I think I see where the confusion is coming from. When Render Silent says "counter target spell" that means YOU are choosing the spell to target that RS will counter. It does not mean that you are choosing a spell that itself is targeting something. Most Magic cards are phrased in a similar way when they target something. Catapult Master exiles a creature YOU target, not a creature that is targeting something itself. Font of Ire deals damage to a player YOU target, not a player that's targeting something else. The wording is "target x". For the alternative, look for wording similar to "that targets x" like in Battlewise Hoplite's heroic ability, Reparations, or the aforementioned Confound. This will let you know the card cares what other things are targeting.

Mutavault > Kor Haven : Being a changeling man-land benefits from a ton of our soldier synergies

Soltari Champion > Chromatic Lantern : Another pseduo anthem when attacking helps with our aggro strategy; a 2 color deck does not need the lantern for mana fixing and our deck is basically mono-white

Consul's Lieutenant > By Force : again an excellent early game for aggro; late game having first strike with a bunch of anthems in the field is good also

Talisman of Conviction > Arcane Signet : same reason for removing Chromantic Lantern; the signet will be use to a 3-color deck that I am brewing.

If you're running mono-white, Smothering Tithe is pretty much a must-have. Caged Sun is pretty great in most mono color decks. For a soldier card that can also draw you cards, Dawn of Hope is a personal favorite. Lastly, if you feel you need more removal, look at Catapult Master

On face, the deck seems like a good budget deck. It conforms with the general standards for an edh deck and follows a clear strategy. However, I think that there are some problems with the deck. Although it is built on a budget, there are only 6 ramp card in total plus 2 cards which decrease the cost of soldiers. On face it looks ok, but paired with only 36 lands (one of which ( Temple of the False God ) being a half-ramp card) it is questionable. I would add another ramp (like Thran Dynamo ) and a land ( Evolving Wilds , Terramorphic Expanse , Spinerock Knoll ). Also, I would argue that the removal in this deck is weak. The only true removal spell is Swords to Plowshares while others with worse conditions, like Response / Resurgence and Spear of Heliod , can have some major downsides in a commander game. The other single target removal spells ( Steam Catapult , Intrepid Hero , Catapult Squad and Catapult Master ) are, quite frankly very limited and. In addition to the weakness of the removal, there are only 7 of them, which is, in my opinion, quite lacking, especially considering 4 of them are creatures and there is no enchantment or artifact removal. I would reccomend the extra investment for Path to Exile , and also consider Lightning Bolt , Vandalblast , Wear / Tear and Oppressive Rays . One final point is the colour wheel of the deck (next to the mana curve). I find that, for a 2 colour deck, there is far too little red for it to be worth playing. Because of this, there are relatively few red mana producing cards, meaning often you will not be able to play the few red spells that you will inevitably draw, they are dead cards (this is why i recommended Terramorphic Expanse and Evolving Wilds above). However, I would also like to complement the deck building, as the theme of the deck is very strong and maintained, and I hope to see it do well in play-testing.

You cannot play Curse of Opulence

And what about Catapult Master ?