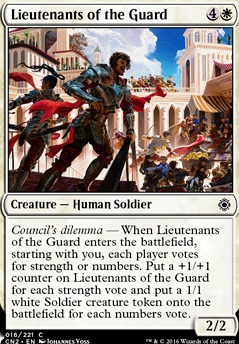 Lieutenants of the Guard

"This isn't a democracy anymore."
by Gattison 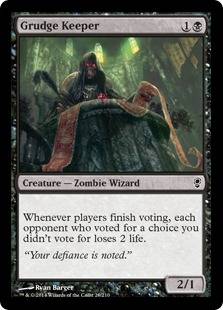 I am the Senate!
by Plasmaturtle

Lieutenants of the Guard Discussion

Protector of the Crown, Gravedigger, Cadaver Imp, Lieutenants of the Guard, Nekrataal, and maybe Village Bell-Ringer. These cards just seem a tad lacking.

Bit of a dilemma... I found a few cards in the 25 cent bin that looked like they could be fun, but am having trouble deciding whether they are in fact good enough, as well as what to take out. The cards in question are: Coalition Honor Guard & Stonehorn Dignitary. I also had Lieutenants of the Guard but... idk, lost it's luster I guess.

Also, here's a few others: (I excluded all the ones I knew were reprints.)

(We still have big pRobles here)

Lieutenants of the Guard