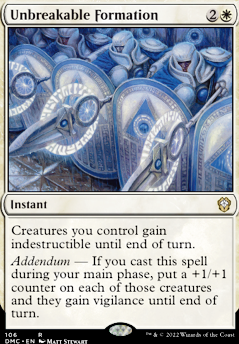 Addendum â If you cast this spell during your main phase, put a +1/+1 counter on each of those creatures and they gain vigilance until end of turn.

Shanid & His Legendary Friends
by Mick-Tis

I didn't look super close at the list but here's a few that I saw that you might get a kick out of:

Sorry if this has some things that are already there, I'm a little rushed atm

Fair point chivalruse. I tried to keep this deck a bit budget though (under â¬175), so I shied away from some more expensive cards. I do think Unbreakable Formation and Your Temple is Under Attack are good suggestions. Will see about subbing those in :)

Instead of Pride of Conquerors, I would suggest Unbreakable Formation. It does cost extra by comparison, but it can give your creatures indestructible and +1 counters instead of the temporary bonus.

Also, I don't think that Thalia, Guardian of Thraben is very good in this deck considering the number of non-creature spells you're running. Dauntless Bodyguard would be less casting cost and still provide a relevant ability.