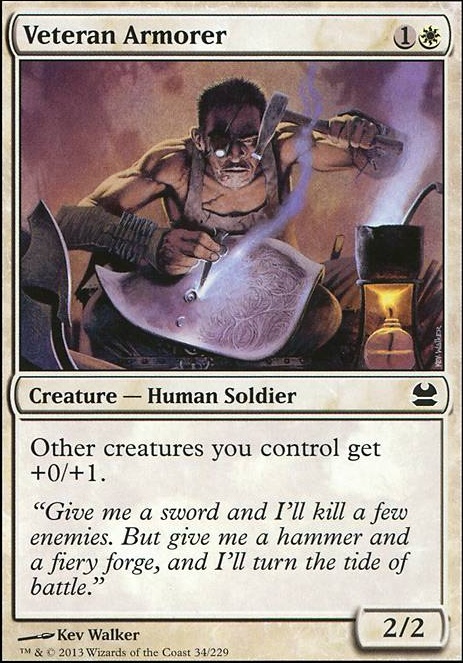 Other creatures you control get +0/+1.

Hello, love your deck so far, here are a bunch of cards i think may have a spot in this deck, Veteran Armorer because toughness is always good in defender decks, Tangle Angler, because with Tetsuko Umezawa, Fugitive they can kill in two turns

I'm not sure what to suggest in replacement, maybe the four Veteran Armorers in the sideboard, but you might like Hissing Iguanar. I do. =)

Also, note that the Iguanar triggers off of ALL creatures, so when you chumps kills another chump, that's 2 more damage to the face.

Order of Stolen Will

Thank you both for the tips!

I've reworked the deck a bit, throwing in a lot of the cards mentioned but also making some new choices of me own.

Do you think Timely Reinforcements is a good choice over the Lingering Souls, Raise the Alarm, and Beckon Apparition? I thought it had good synergy with the life cost cards that are in now and also would possibly let me boost my creatures back up quick should I need to use Wrath of God, which I think was a great suggestion.

I can see what you mean with Thraben Doomsayer. I like the suggestion of Doomed Traveler because I get to keep a creature on the board when he dies and he's very cheap, meaning he'll be easy to play if I need an extra body to flip Hanweir Militia Captain  Flip. I like Brimaz, King of Oreskos's abilities, but I don't like how he thematically fits into the deck.

Since I'm not quite as hyper focused on Human tokens with the new suggestions, I chose Honor of the Pure between the two mentioned. This should boost almost all of my creatures. Additionally, I replaced Elgaud Shieldmate with Veteran Armorer as he's cheaper and continues the boosting theme for all of my other creatures.

I went with Dissolve for my second counter, do you think it's a better choice? I like the idea of largely removing a card rather than just delaying it a turn. I think I have decent enough card draw with Cryptic Command and my 4 Curiosity to lose that aspect, and I like the small, extra Scry effect.

I noticed in playtest that I was somethimes having trouble getting the color I needed mana-wise, so I also threw in a bunch of Hallowed Fountains and extra Mystic Gates. Do you think these are smart choices?

I really like the deck and how it's built!I think that you've done a great job at creating this deck, you used the best life gain cards for pauper and took advantage of the creatures that follow the strategy using pump spells like Ramosian Rally.One thing I would consider when building a deck like this is that pauper doesn't have any payoff cards for life gain strategies. For example, the modern version of the deck runs Serra Ascendant and Ajani's Pridemate - both cards give an advantage that makes the life gain into an actual threat.Because the pauper format sadly doesn't have any payoff cards for this strategy, I think it's the best to go with a sub theme. Actually, your deck is almost fully themed with this in mind, in my opinion - tokens. Adding this so called "Flavor" to the deck will give you a more solid way to win, especially against decks like turbo fog that doesn't really care about your life total. You already have 6 token themed spells and 6 pump spells, you are already on this path!And lastly, I think it can be great to add a card like Lumithread Field or Veteran Armorer in the sideboard, maybe about 2 or 3 copies? Youres pretty heavy on the artifact and enchantment hate, so maybe a good idea would be to take out 1 Honorable Scout and 1 Patrician's Scorn.Again, I really like how you built the deck and enjoyed trying it out. What do you think about my suggestions? I'm curious to hear ;)