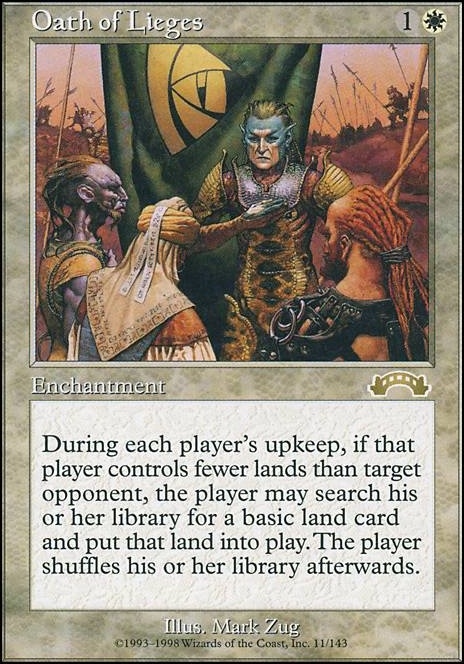 No, the OTHER Unicorn
by Vessiliana

This is all I could think of:

Flavour alert! I already love this deck; the Prince is one of my favourite books and some of its principles I try to live by in games. To see a deck based on some of its philosophies makes me happy more than I can say. I do think Oath of Lieges could be fun in this deck.

Omniscience_is_life and are those percentages of mono white decks? Or all possible decks running white? Because nobody who's allowed to play Read the Bones will consider a Martyr's Cry for their card draw. It's a lot easier to play with statistics than it is to play magic.

I did explain how I thought white is the underdog, the colour that needs to work a little harder for the same results, because the color is better suited for 1v1, and low played % can mean several things. Not only that the card is bad, it could also mean people don't want to work harder. It could mean the cards are less available, or unknown.

Plus, white is uniquely equipped to make sure it's opponents have more lands in play, with Path to Exile , Winds of Abandon , Karoo , Guildless Commons , Oath of Lieges etc.

King_marchesa I'm afraid Tithe is a reserved list card, yes. Gift of Estates is close though.

But if you're advocating a white Harmonize and Cultivate , do you really want to play white? Or do you actually want to play Simic, without the image of evil and overpoweredness that has accompanied these colors recently? Because if you don't want to play equipment (which has gotten a massive power boost with Commander Legends and even broke onto cEDH as an archetype because of it), or weenies, or lifegain, why do you want to play white? And if you'd rather play Cultivate or Harmonize but in white! but don't lose access to Wrath of God , Sun Titan and Swords to Plowshares , why not play selesnya? The color system works on colors both exploiting and complementing each others' strengths and weaknesses, and not every color is meant to do everything. If you want to Cultivate , play green, it's ok to play green.

Colorshifting with a white twist just to give the color access to the same staples that the other colors have, is not a solution that would fix white. It would make white just feel like the other colors, pushing out the actual interesting white cards to make room for green "light" gameplay.